Dining with Disaster: An Insider's Perspective on the Chaos in "Hell's Kitchen" 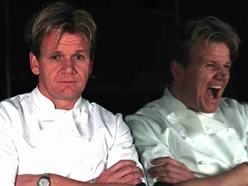 Dining in Hell's Kitchen often seems to be an exercise in futility and a Herculean test of patience.

So when I learned that two Televisionary operatives would be dining there, I did the only humane thing and told them to be sure to eat ahead of time.

Did my associates ever get their food? Were they lambasted by tantrum-prone chef Gordon Ramsay? When I realized that the Hell's Kitchen episode they participated in was scheduled to air tonight on FOX, I got the scoop from "Ruth" and "Gael" (names have been changed to protect the hungry) on just how hot it got in Hell's Kitchen.

Ruth and Gael happened to arrive at eatery Hell's Kitchen on Valentine's Day, traditionally one of the busiest (and most lucrative) restaurant nights of the year. Would it be romance and champagne in the Kitchen? Or heartbreak and empty stomachs?

From the start, it was obvious that things were a mess. That night, the two teams had devised separate menus and it was up to diners to decide which they'd order off of, rather than be seated in a particular side of the restaurant. In the red kitchen: Sara, Maribel, and Virginia; in the blue kitchen: Heather, Garrett, and Keith. Poor maitre d' Jean Philippe was having a hard time and was even telling people to order off of the red menu (the women's kitchen), because things were quickly turning pear-shaped in the blue kitchen. (Get it together, Heather!)

"The cameras were all over our table at the beginning when we ordered," said Ruth. "We were only to talk about the food and how long it was taking, etc. A table nearby ours was playing a game while waiting for their food. But I think someone took the game away from them."

Denied even the amusement of a simple game, Ruth and Gael waited... and waited and waited. Both began to get antsy and it wasn't helping matters that the staff continually kept plying them with more alcohol. "To be honest, the thing I remember most is how many times they kept coming back to fill our wine glasses," said Gael. "I don't normally drink that much, but that night I had a bottomless cup. I don't know, but it seemed like they were trying to get us inebriated. It was almost as if they wanted a one night stand with me..."

In between glasses of wine, Ruth and Gael noticed the complete chaos around them. People kept going up to the glass partition in the kitchen and complaining about how long it was taking to be served, which was undoubtedly slowing things down considerably. After drinking a few glasses of wine, Ruth went up to see what the problem was in the kitchen, but discovered that someone was already complaining. Chefs were running around like deranged headless chickens, but no food was coming out. And Ramsay was livid, screaming bloody murder every chance he got because apparently there was a "big mess up" in the kitchen.

But, lo and behold, the blue kitchen actually managed to get their dishes out before the red kitchen (at this table, anyway) and Ruth and Gael did eat that night. The food? Some sashimi with sesame seeds that was deemed "just okay" by this dining duo, followed by a chicken roulade stuffed with spinach and herbs that was surprisingly "really good."

Sadly, Ruth and Gael never made it to the dessert course, though many other parties did receive their third and final course. "We were really disappointed," said Gael, "because we got a chance to see everyone else devour the little delectable desserts and we were there so long we felt like we deserved it!"

But things had apparently gone from bad to worse in the kitchen. "At one point Ramsay started yelling, got frustrated, and just walked out," said Ruth. "Soon after we looked around and the cameras were gone and most of the people were gone. It was a little confusing... Is that it? Do we stay or go? No dessert?" (Not in this lifetime, anyway.)

Afterward, Ruth walked to the kitchen and thanked Hell's Kitchen chef Sara. "She was really nice," she said. (Sara? Really? Ruth must have had a lot to drink that night.) Grabbing their things, they walked out, a little shocked and more than a little disappointed. Still, not everything was so bad, according to Gael. "The bread on the table was absolutely fantastic," she said. "The cracker one with cheese on it was exceptionally good. In fact, now when I think about it, I probably filled myself up with bread."

So there you have it. Come for the ambiance at Hell's Kitchen and stay for the bread.

If you missed Friday's Stateside airing of the hilarious and surreal 1999 sitcom Spaced (starring Shaun of the Dead's Simon Pegg), here's your chance to catch the fifth episode before another episode airs Friday. On tonight's episode ("Chaos"), Tim takes Daisy's new dog Colin out for a walk and promptly loses him, causing Daisy to accuse Tim of deliberately losing the dog. However, when they learn that the dog was, er, dognapped, they launch a rescue mission.

Another chance to catch the third episode before a new episode on Friday. On tonight's episode, Mark, convinced that they'll sleep together, attempts to stop his nemesis Jeff from taking a business trip with Sophie. Meanwhile, Jeremy becomes uncontrollably possessive over his new girlfriend Nancy.

See above. On tonight's installment of the FOX culinary competition show ("6 Chefs"), the teams devise and introduce two individual menus. I'm not sure which is worse: not being able to get Gordon's dishes off the line or your own?

I know, it's on Lifetime of all places. On tonight's new episode of the improvised comedy ("The Loser Club"), Burke and Lydia struggle to match up their most challenging clients before an annual company mixer.

Anonymous said…
Big surprise - a reality show interferes with reality. Telling people what to talk about, etc. It's like - I know it goes on, but I don't necesarily like to know about it.

Not that surprised Sara was nice. As you know, I have one degree of separation from her and have heard she is very nice. So again, probably playing a reality show role. She said she had a lot of fun doing the show, so maybe part of the fun was creating a role? I don't know. I haven't watched.

One of my old neighbors was the most reviled contestant on Unan1mous. Another show I never saw, but my reaction was "John?!?! Really?!?" Cause he was one of the nicest people around. I saw him shortly after the show ended and he said he had a blast.