Another Bite: HBO Renews "True Blood" for a Second Season 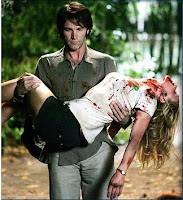 In a surprise move, pay cabler HBO has ordered a second season of drama True Blood, shortly after airing the series' second episode earlier this week.

Production on Season Two of True Blood is set to kick off early next year in Los Angeles with HBO slated to air the sophomore season of the Alan Ball-created series during Summer 2009.

“We are absolutely thrilled that the critics and our viewers have embraced True Blood,” said HBO's Michael Lombardo, president of the Programming Group and West Coast Operations, in a prepared statement. “Alan Ball has done it again – made an addictive series that is unlike any other.”

“I am thrilled to be able to continue to work with such a talented group of writers, cast and crew to explore the characters and world created by Charlaine Harris in her novels,” said Ball. “It really is a joy to go to work every day and I couldn’t be happier to be back home at HBO.”

Anonymous said…
Seriously? I thought it didn't do very well and all of the reviews I've seen have been fairly negative. I'm surprised they renewed this at all let alone so quickly.
9/18/2008

Anonymous said…
Hopefully, Bella, you've continued to watch the show and seen how amazing it truly is! I've never been hooked a show like I am on this one...by far the best show I've ever seen! and so unique!!! I wouldn't be surprised if they went ahead and signed on for another 10 seasons...I'd be there every Sunday night!
10/13/2008