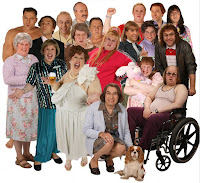 There are few things that are certain in this life: death, taxes, and the fact that that I will laugh uncontrollably whenever I watch David Walliams and Matt Lucas.

I speak, of course, of the creators and stars of BBC's Little Britain, who have taken their subversive sketch comedy act on the road, partnering with pay cabler HBO to develop an American-centric take on their comedy of the absurd with Little Britain USA, which launches on HBO on September 28th.

I was extremely curious (not to mention concerned) to see just how well Walliams and Lucas' bizarro characters would translate across the pond. It turns out that I needn't have worried, as the three episodes of Little Britain USA provided for review prove that the dynamic duo's keenly wicked sense of humor is still sharpened like a rapier.

If you have no familiarity with Little Britain, fret not: there's none needed (though shame on you for missing what is arguably one of the very wackiest comedies of the last decade) though Walliams and Lucas have brought along some of their favorite creations--notably Fat Fighters group leader Marjorie Dawes, PM aide-turned-prime minister Sebastian, unconvincing transvestite Emily Howard, gay Welsh lad Daffyd (he of the catchphrase "I'm the only gay in the village"), surly receptionist Carol Beers, the inimitable Bubbles de Vere, chavvy delinquent Vicki Pollard, and fan favorites Lou and Andy, whose arrival at a local motel somewhere in the heart of America sets off the first installment of Little Britain USA.

However, I'm completely taken with Walliams' latest creation, Phyllis, who is so in love with her adorable King Charles Spaniel Mr. Doggy that she believes that he is not only speaking to her (in the voice of a husky black man, no less) but compelling her to do all manners of unspeakable and disgusting things, like removing her clothes and climbing into a garbage can in public. Adding to the hysteria brought on by this recurring sketch is the fact that the voice in Phyllis' head is so implacable while the pooch himself is so serene and, well, adorable.

Using a mix of those familiar and new characters, Walliams and Lucas skewer not only the British wackos they are used to eviscerating but also turn their gimlet eyes onto larger targets as well: the American public, poking fun at the celebrity-worship, racism, hypocrisy, and moral outrage that inform our everyday lives. Masking this in body-covering latex and funny wigs, the comedy duo manage to give us an outsider's perspective on what makes this country tick in a way that Tracey Ullman recently tried to achieve in her Showtime series Tracey Ullman's State of the Union but failed to hit the mark.

Playwright George Bernard Shaw once famously opined that England and America are "two countries divided by a common language" but HBO's deliciously naughty Little Britain USA truly proves that it only takes hysterical comedy such as that of Walliams and Lucas to unite our two cultures.

Danielle C.F. Maris said…
I was worried that the Americanized Little Britain would not be as good as the original but was happy to learn that it's every bit as awkward, improper, and hilarious!
9/23/2008

Anonymous said…
My new favorite character is definitely Mr. Doggy (and his crazy owner). As for the old characters, I will never get tired of Lou and Andy!
9/23/2008