Tea and Sympathy: Pour From a Piece of Your Favorite Show 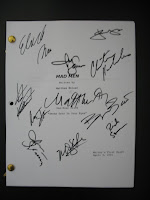 Looking for a copy of the Mad Men pilot script signed by creator Matthew Weiner and the cast? You've come to the right place.

Why is this newsworthy, do you ask? I'll tell you: it's a prime opportunity to not only help support the non-profit educational foundation of BAFTA/LA (the British Academy of Film and Television Arts/Los Angeles)--including BAFTA/LA Inner City Cinema benefiting local youth, the Heritage Archive, scholarships, seminars, and mentoring programs and internships--but also to bid on some seriously fantastic collectibles related to some of your favorite series. 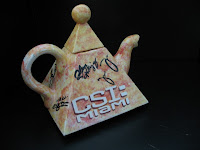 Up for grabs in this auction: one-of-a-kind celebrity designed teapots, signed by the casts of many of your favorite series, including 24, Farscape, CSI: Miami (pictured at right), 90210, and So You Think You Can Dance, among others.

Tea not your cup of, er, tea? No worries, as there is a slew of other great items up for auction including: a framed limited-edition poster of the famous "Last Supper" tableau from Battlestar Galactica (I might just have to bid on that myself); a plum Heroes package comprised of a signed script, T-shirt, Season Two DVD box set, trading cards, and more; VIP tickets to a taping of The Tonight Show with Jay Leno; tickets to the finale taping of Dancing with the Stars; signed cast photos and script, DVDs, a behind-the-scenes book, and other goodies from FOX's 24; and many others.

Meanwhile, fans of such series as Weeds, 24, Mad Men, Heroes, Dexter, Battlestar Galactica, and Brotherhood, take special note. Among the other non-tea pot items on offer are signed scripts that would be perfect for your collection of Hollywood collectibles.

The BAFTA/LA Celebrity Auction runs through Sunday, September 28th, so act now while you still have the chance. Ta!

Anonymous said…
I want the signed Mad Men script! A Mad Men teapot would have been cool too. They could have given it an authentic 1950s look!
9/12/2008