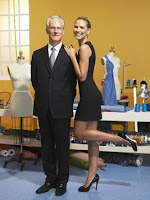 Welcome to your Monday morning television briefing. I'm still in telly overload mode, having watched the first three episodes of Season Two of Pushing Daisies, the first two episodes of the CW's Stylista, and the shocking new installments of Skins and Mad Men this weekend. Whew.

The big news over the weekend was that a New York judge has handed out a preliminary injunction on Friday, which has temporarily barred the Weinstein Company from moving Project Runway from Bravo to new home Lifetime. The move casts some shadow on the future of the series--which is meant to launch its sixth season in January on the women's cabler--though production will continue in Los Angeles. If the case goes to trial, it's likely that it would delay the launch of Season Six, which could put Weinstein in a sticky place with Lifetime; not unexpectedly, Weinstein Company is expected to appeal the injunction. (Variety)

Could the science in FOX's Fringe be fictional? Um, the series deals with fringe science, after all, and I don't think it was ever designed to offer up textbook descriptions of actual scientific theories. The point of the show is not to be a classroom film on the state of science and technology," said J.J. Abrams. "It's science fantasy. We're trying to entertain people with interesting characters placed into exciting situations, not bore them." (USA Today)

Jesse McCartney (Summerland) has booked a recurring role on ABC Family's drama Greek, where he'll play Andy, an old friend of Calvin and a freshman athlete who is torn between pledging the KT and OX frat houses. He'll first turn up in early 2009. (Entertainment Weekly's Ausiello Files)

HBO is developing Americatown, a futuristic drama which would follow ex-pat Americans as they live in cities around the world, "set 25-40 years into the future when the precipitous decline of the U.S. leads to a mass exodus of its citizens." Project is from writer/executive producer Bradford Winters (Kings) and executive producers Tom Fontana, Barry Levinson, Frank Marshall, and Kathleen Kennedy and had previously been developed as a series, movie, mini, and book. "By presenting Americans as immigrants in the near future, as both underdog and hero in the drama of global dislocation," said Winters, "we substitute a mirror for the rancor that informs much of the partisan debates on immigration." (Hollywood Reporter)

The New York Times has a fantastic interview with prolific writer/director/actor Paul Feig, of The Office, Freaks and Geeks, and Arrested Development. (And did you realize he directed an installment of Mad Men? I didn't!) (The New York Times)

NBC Universal will use its recently acquired UK production entity Carnival to produce its midseason series The Philanthropist, starring James Purefoy, as part of an effort to shift production away from the US as production costs continue to climb. Production on the series will begin in London in November, with most of the filming taking place in the UK and South America. Pilot installment was written by David Eick (who replaced Tom Fontana) and will be directed by Peter Horton. (Variety)

Wondering what former Melrose Place vixen Heather Locklear is up to these days? Looks like she got arrested over the weekend after driving her car repeatedly over some sunglasses and then stumbling into traffic. Eek. Alcohol has been ruled out as a factor in her behavior. (E! Online)

FOX has confirmed that it has cancelled freshman comedy Do Not Disturb. No decision has been made about the four episodes that were filmed that had yet to air. (Broadcasting & Cable)

Bravo has scored off-network rerun rights to CBS' summer series Swingtown, which it will begin airing this fall as part of a block of drama programming that includes The West Wing and Law & Order: Criminal Intent. No decision yet about the fate of Swingtown but a renewal by CBS is looking rather unlikely. (TV Week)

Don't hold your breath waiting for Michelle Ryan (Bionic Woman) to return to BBC's EastEnders, where she played Zoe Slater for five years. Ryan returns to the airwaves next in a four-episode stint on Merlin. (Digital Spy)