Always a Bridesmaid, Never a Bride: The Final Challenge on "Project Runway" 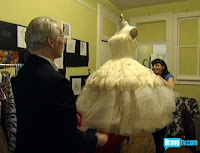 And just when you thought this competition was over, one final glittering twist.

I'm talking of bridesmaids dresses, the contestant's one final challenge before making it to Bryant Park on last night's episode of Project Runway ("Finale, Part One"). The final four--Jerell, Korto, Leanne, and Kenley--return to Parsons with their collections in tow and the bridal dress they were tasked with creating... in addition to full-fledged collections.

I had a feeling that the choice to which three of these designers would make it to New York Fashion Week would hinge more on the wedding dress than on the collections themselves but I had no idea that the producers would then force these weary designers to create another piece to send down the runway, challenging them to create a bridesmaid dress that would function as part of their collection and be paired with the wedding dress.

While I'm not sure why the wedding dresses came down the runway first (shouldn't you leave the piece de resistence to the very end?), I thought that it was pretty crummy that one of these designers would get the boot based on a shoddy bridesmaid dress... and that, thanks to a bolt of inspiration, Kenley sadly wouldn't be the one to pack her things and go...

I actually thought that Kenley did a pretty damn good job with both her collection and her wedding dresses. While we only got a peek at the collection when Tim visited her cramped Brooklyn apartment, what we did see was inspired and showcased the talent that we originally saw in Kenley early on this season before she turned into a raving bitch and pouted in front of Tim, Heidi, and the judges. As for her wedding dress, it was an Alexander McQueen-inspired (whether intentional or not) feathered affair that was a show-stopper no matter whose collection it was coming from, showing both a great design aesthetic as well as a combination of whimsy and an elegance. This was a dress to remember. As for her bridesmaid dress, Kenley took a similar shape as her wedding dress but the similarities ended there; instead she crafted a sapphire bubble skirt with a sheer top that was girlish and sophisticated and very, very pretty. Sigh. And here I was hoping she'd be going home last night.

I was extremely worried about Korto, I will say. I thought her collection was fantastic and was keeping my fingers crossed that she'd get the opportunity to display it at Bryant Park but after seeing her overwrought and over-complicated wedding dress and the sheer simplicity of her bridesmaid dress, I was more than concerned that she wouldn't earn her spot at Fashion Week. Her greyish wedding dress had far too much going on: ruffles, beads, pleats and the effect was more lumpy than voluminous. The "bride" herself seemed lost in the dress and it didn't capture the joy and elegance of a wedding setting, instead functioning as just an overwrought evening dress. Would a veil have helped? Nope, as it would have just further complicated an already overburdened design. Korto's bridesmaid dress, however, seemed completely separated from the collection, far too stripped-down and oversimplified. There was nothing elegant or memorable about it and it just seemed to be another pretty dress that could be worn for any occasion. Eek.

From the second her wedding dress hit the runway, I knew that Leanne had snagged one of the Fashion Week slots. Her dress was absolutely breathtaking, a cream concoction of wave-like fabric pleats that was elegant and sophisticated without being over the top. It was a stunning display of technical genius, toned-down architectural design, and impeccable taste. And, unlike many of Leanne's previous designs, was absolutely rooted in joy and happiness. Her bridesmaid dress was equally stunning, capturing the same wave-like movement of both her wedding dress and her overall collection and keeping in the same color palette as her collection: cool blue, cream, white. It was gorgeous and the two dresses looked amazing separate and together. Well done, Leanne!

And then there was Jerell. As soon as I saw his collection back in Los Angeles, I had a feeling that he would be the one cut from the competition. There was just far too much going on everywhere, too many fabrics, too many embelishments, too many chains and bells and whistles, all competing for the viewer's attention. I get that that is his design aesthetic, but the judges have called him on being "messy" in the past (though always let it go due to time constraints) but he didn't have those same time constraints when creating his collection and everything still had a very messy, unfinished look to it.

I am not sure what to make of Jerell's wedding dress, which tried to approximate Christian Lacroix but missed the mark completely; I agree with Tim, who said that everything above the empire waist was messy and looked unintentionally sloppy but Jerell unwisely didn't heed his advice, instead sending a garment down the runway that looked thrown together and disjoined. Plus, his model did look like, in the immortal words of Michael Kors, she had a flower pot on her head. His bridesmaid dress looked equally sloppy, a shimmering turquoise sheath dress with some sort of flower embellishment. Sigh. After winning last week's challenge, Jerell should have had this in the bag but instead he didn't spend enough time on the details, throwing together too many things and not editing enough.

Sure enough, it was Jerell who was told that he wouldn't be competing at New York Fashion Week and it was easy to see just how gutted he was, especially when the judges said that he didn't put enough thought into his pieces. I feel bad for Jerell but I am happy that Korto made the cut because her collection looked absolutely stunning. And, in the fashion business, you are only as good as your last garment. Or as Heidi likes to remind us, one day you're in and the next day you're out.

Next week on the season finale of Project Runway ("Finale, Part Two"), Leanne, Kenley, and Korto prepare for their runway shows at New York Fashion Week but each encounters challenges along the way; the judges--including, for the first time, mentor Tim Gunn--choose an ultimate winner.

Anonymous said…
I have to say...Kenley really stepped up her game. Her collection (including that fabulous wedding gown and bridesmaid dress) looks not only fun and inspired but beautifully made as well.

And I'm very happy that Korto didn't get cut. Her wedding pieces were not fantastic but the rest of her collection was interesting and unique and I'm looking forward to seeing it on the runway.

I still hope that little Leanne takes home the top prize, though, as her work has been consistently impressive and that wedding gown was Vera Wangtastic! I just hope the rest of her line has enough personality to wow the judges.
10/09/2008