American Candy, Missing Taxis, and Lost Containers: Another Leg of "The Amazing Race" 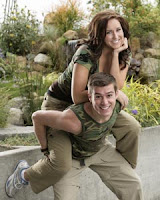 Was it just me or was last night's episode of The Amazing Race ("Do You Like American Candy?") the most hilarious hour of reality programming you've seen in a very long time?

Let's see: we had Terence bashing his head on a car trunk and then screaming at his girlfriend Sarah to clean his head straightway and "blow on" the wound and then later they hiked to a far-off village to snag a taxi whilst the other teams followed the marked path to the taxi parking. We had Kelly and Christy digging in the sand for a non-existent container (it was a reference to the other Detour option) for what seemed like a good half-hour and later inadvertently losing their taxi (it was in the parking lot the entire time); Southern belles Marisa and Brooke meanwhile couldn't find their way to the computer-based Detour and were still talking about computers and shipping containers as they stared at sailing ships. Hell, later, one of them said of the lame wall-based word clue that she thought it was "somewhere on the wall." Um, yeah. That was just as clever as whoever thought that bribing people with "American candy" would get them far in the game.

Are reality television contestants getting dumber or just funnier, I can't help but wonder. In any event, all of them brought me some much needed mirth last night as they argued, bickered, and made enemies with one another with abandon. It's episodes like this that remind me why this series stands out among the glut of poorly produced and hastily thrown together reality series.

This week, the teams headed to Cumbuco, Brazil but first there was a heated altercation between team mates Terence and Sarah at the Pit Stop. “I do want to be with you," said a tearful Sarah. "I just don’t want to not speak to another single person, which I feel is the only thing that’s going to make you feel like I want to be with you.” While Terence stormed off, Sarah was forced to admit that she felt like she was betraying Terence every time she spoke to a competitor. Wow.

The drama continued at the airport and T&S ran afoul of Ken and Tina, when Tina took credit for getting the airline to switch to a bigger plane, allowing all of the teams to get on a much earlier flight. I hate to say it, Tina, but there was no way ANY of you were getting on that earlier flight unless they moved to a bigger plane (there was, after all, only one seat available on that flight), so I wouldn't be going around telling everyone that they owe you after you personally got them on the plane.

I thought that this week's challenges were pretty lame. I was glad that Mark and Bill (go geeks!) were smart to choose the computer-based Detour that had them searching for shipping containers in the port (flashes of Season Two of The Wire) but I was so irritated that they managed to slip to second place when Ken and Tina beat them in a footrace to the mat. (Grr.) The sailboat-pushing challenge was good but would have been even better if they had not had the help of the locals as well. As for the Road Block--where they had to find their next location, Cicade Da Crianca, from a series of words on a wall--I thought it was perhaps one of the lamest challenges ever to appear on the Race. Yes, many of teams (especially Nick) overthought the challenge but in the end, it really just involved written a whole bunch of stuff down and reciting them one after another. Hardly a physically or mentally-taxing challenge, to say the least.

Ken and Tina are proving themselves to be the team to beat, despite their fragile relationship and general snarkiness with one another... while Nick and Starr are earning a reputation for being sneaky and underhanded. (Loved how he asked Sarah to team up with him and then dropped her thirty seconds later and then promised frat boy Andrew that he'd come back to him with the clue, only to take off seconds later.) Nick and Starr will either prove to be as craft as Rob and Amber... or as generally unliked as Jonathan and Victoria. Only time will tell...

Next week on The Amazing Race ("Did You Push My Sports Bra Off the Ledge?"), the competition heats up as the teams head into the third leg of the race but many succumb to the perils of altitude sickness; Ken enters the ring and impresses wife Tina with his moves.

Anonymous said…
You forgot about one of the frat guys jumping ON the boat (which would make pushing it a little difficult).
10/06/2008

Anonymous said…
I was so mad that Ken and Tina made it to the mat before Mark and Bill since I don't think Tina would have gotten through that roadblock as quickly as she did without their help. And, yes, that was one of the lamest challenges ever.
10/06/2008