Breakups and (Creative) Breakdowns on "The Office" 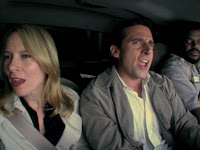 This week's episode of The Office was a masterclass to me on how not to plot a television series.

The latest installment of the creatively flagging NBC comedy ("Employee Transfer"), written by new writer Anthony Farrell, undid all of the creative spark the series had rediscovered by adding Amy Ryan to the cast for a brief time. And while I didn't imagine that Ryan would stick around longer than her six-episode commitment, I thought that the writers would be able to competently plot out her arc much better than they actually did. Why have her and Michael get together as a romantic couple at all, just to have them split up a scant two episodes later when they're confronted (off-screen, I might add) by Dunder Mifflin corporate about their inappropriate relationship?

Ryan has proven to be a wellspring of creative energy and her presence on the series has imbued it with a fresh energy and a new direction for Michael's character. And yet the way in which she was lead off of the series was so uninspired and so awkward (and not in the good Office cringe-while-you-laugh sort of way) that it virtually made her six-episode arc a footnote to the series rather than a positive development. Holly imbued Michael with a level of humanity that we've not seen before on the series and gave him someone to react to that wasn't pathologically crazy (i.e., Jan) but a mirror-image reflection of his own sense of humor and neuroses.

Why bother having anything Halloween-related if it was merely relegated to a painfully unfunny (save Creed's Joker impersonation) cold open that bore no relevance to the rest of the episode? Why bother having Andy and Dwight pretend to be one another when Jim and Dwight have already danced this particular waltz in the past? And while I went to Cornell for my undergraduate degree, I found the entire Dwight-insisting-on-applying to Cornell to be dull and leaden. Plus, wasn't it originally established that Andy didn't actually attend Cornell back in Season Three? (Though I suppose the writers already devalued that fantastic revelation by having members of his acapella group appear on-screen.)

Why bring in Jim's loutish older brothers (who, incidentally, did not seem to resemble Jim Halpert in looks, manners, or behavior) if the entire point of the endeavor was just to make Pam feel bad once again about her art school ambitions and have Jim defend them? The entire restaurant exchange went on for far too long and lacked any remote trace of humor.

Compare the "New York" scenes with Jim and Pam to the fantastic and witty scenes between Jim and Karen in Manhattan back in Season Three and it seems like the NYC setting was completely underused when it could have been a fantastic opportunity to show just how much Pam has changed during her tenure in Manhattan and how much more cosmopolitan and sophisticated she's become. But no. I'm absolutely convinced that the writing staff has grown just as bored of Jim and Pam as I have and are tired of coming up with contrived storylines for the duo.

Ultimately, I was fooled by last week's episode into thinking that The Office may have found its footing once again with Ryan's story arc and last week's improved outing but this week's episode once again proved that things are not well in this office. Can we please get back to workplace-based humor that's real and grounded? Or have the writers so shifted the focus of this series so completely that things like office Olympics and sales calls now seem mundane and lacking in any comedy?

When I think about that, I feel about as sad as Kelly on a bad day.

Next week on The Office ("Customer Survey"), Dwight and Jim get the results of the annual customer survey report and are shocked by the findings; Pam and Jim decide to spend every second together by using their Bluetooth phones; Angela and Andy pick an unusual location for their wedding.

Anonymous said…
The episode felt extremely disjointed and, if this was Amy Ryan's last appearance, I think they really wasted it.

It's too bad that they couldn't keep her around for longer. I really would have liked to have seen her and Michael wreak havoc on The Office together. And their relationship was so fresh and interesting (unlike the Jim and Pam storyline).

Creed's impression of The Joker was hysterical but then they undermined their own joke by also having Kevin and Dwight dress as The Joker too. And, based on the cold open, I thought it was going to be a Halloween episode but then the rest of the show took place on a different day. The whole thing just felt...off.
10/31/2008

Unknown said…
I couldn't agree more. The Halloween cold open was funny--at first--with Dwight irritating Andy about being a Cornell fan. I thought the ep was going to be Dwight trying to make Andy lose it so Angela would break up with him. Obviously, I was disappointed.

The only funny part of the Holly/Michael/Dwayne road trip was when the three of them started singing along to Tom Cochrane. After that, it just got bad. Michael's leaving her to go back with Dwayne seemed merely pathetic rather than poignant.

I thought one of Jim's brothers (the one who sat next to Jim) tried to have some of Jim's mannerisms, but the "prank" was just mean, especially after what Pam's gone through in pursuit of her art. The writers need to get her back to Scranton because this long-distance comedy isn't working.
10/31/2008

Anonymous said…
Isn't "The Office" signed on for two more seasons??! They have completely run out of steam, and so far, I have enjoyed only 1 episode this year. Each episode has definitely contained elements that I have enjoyed, but overall I am completely dissatisfied with this show every week. Amy Ryan was the best thing about the show this year, and with her now gone I cannot envision myself continuing to be interested. I'll keep watching (because I'm a fan), but I don't think I'll enjoy myself too much.
10/31/2008

Anonymous said…
I came here today hoping you agreed with me. And you did. Man, that was a WEAK episode. So disappointing on so many levels, especially after last week.

The Andy/Dwight story was AWFUL. Painfully unfunny. Jim/Pam story - who cares. Most of the moving story was bad, bad, bad (though, like skst, I did like the singing - at first). Also, like skst, I did think one of Jim's brothers had his mannerisms, but that was it.

I kinda liked the CO, and thought it just went straight downhill after that.

Ugh, what a disappointment.

The CineManiac said…
Seriously what was up with the Halloween open into nothingness.
I was looking forward to Creed as Joker because of the promos and thats all we get?!?!? (By the way loved Creed's comment last week about the last person who stole from him...Creed Branton! He's amazingly creepy and I love it)
But I have to defend the three Jokers, I think that was part of the joke, with that being the goto costume this year.
But the rest of the episode did feel flat, the prank was mean (i did like Jim & Pam's reaction "let's "prank" him about being bald") and I hated to see Holly go.
My main problem is that I understand being concerned since Micheal's last office relationship turned out very bad for the company, but since he and Jan were in a longish-distance relationship why would they think it would matter that Holly was in a different location?
I'm still hoping they find a way to bring her back, and get them together.
10/31/2008

that was my one laugh in the entire episode.

what was the point of the dwight/ andy conflict if angela wasn't there to witness any of it? having her see andy as dwight at the end only confirmed what a wasted opportunity it was
10/31/2008