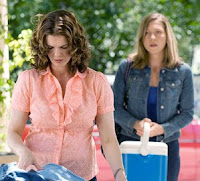 Welcome to your Thursday morning television briefing. My mind is still buzzing after last night's double-bill of Lost and Damages.

Pay cabler HBO has renewed drama Big Love, about the polygamist Henrickson clan, for a fourth season. Production will begin later this year for a 2010 launch. "The stellar reviews and solid viewership this season confirm that this is a signature series for HBO," said Michael Lombardo, president of programming at HBO. "The series keeps getting better and better." (I have to agree with him: this season has been absolutely amazing!) Once DVR, encores, and VOD ratings are added in to Big Love's initial airing, viewing figures soar to about 5 million, on par with HBO's True Blood. (Variety, Hollywood Reporter)

Pushing Daisies' Anna Friel is said to be in high demand this pilot season. Friel has received three offers so far: ABC drama pilots Eastwick and I, Claudia and CBS drama pilot House Rules. Her former co-star Lee Pace was said to have been offered pilot but declined. (Hollywood Reporter)

Meanwhile, Friel's other Pushing Daisies co-star Swoosie Kurtz has been cast in ABC's Desperate Housewives, where she will play a potential love interest for one Wisteria Lane resident. Kurtz's first episode of Desperate Housewives is slated to air in March; she'll then be seen as high society dame Millie on NBC's Heroes in April. (E! Online's Watch with Kristin)

For the first time, Doctor Who will be filmed in high-definition, beginning with the Easter special, "Planet of the Dead." Move marks the first HD outing for the sci-fi series, although spin-off series Torchwood has been filmed in HD since it first launched. (Digital Spy)

Vivica A. Fox (Curb Your Enthusiasm) will host TV Land's eight-episode dating competition series The Cougar, which will premiere on April 15th. And, yes, it's about exactly what you think it is. (Variety)

NBC has delayed the launch of geneology-based reality series Who Do You Think You Are? until the summer. Deal or No Deal will take over the Mondays at 8 pm timeslot, currently occupied by Chuck, for three weeks beginning May 4th. (Futon Critic)

Imagine TV is said to be looking for its next Arrested Development. The shingle, headed by Brian Grazer and David Nevins, is developing FOX single-camera comedy pilot The Chairman of Chatsworth, written by Dan Palladino (Gilmore Girls), about a lawyer with a "questionable moral compass" who is said to be loosely based on Grazer's own father. Also in development: an animated series based on Angry Little Girls (based on Lela Lee's comic) with Simpsons vet Josh Weinstein, the redeveloped Nice Girls Don't Get the Corner Office at FOX (it was originally shot as a pilot for ABC in 2007), and NBC comedy pilot Parenthood. (Variety)

Battlestar Galactica's Kate Vernon talks to The Daily News about her role on the sci-fi series and hinted at the scope of the series finale. "None of us saw the ending coming," Vernon said in an interview. "I would just say, erase your mind of any expectations and really watch the show with an open mind. So much is to be revealed." (The New York Daily News)

The House of Representatives has voted to approve the DTV delay, shifting the transition from Feb. 17th to June 12th, and has sent the bill to President Obama to sign. The delay, according to White House spokesperson Amy Brundage, "means that millions of Americans will have the time they need to prepare for the conversion." (TV Week)

Anonymous said…
Hurrah! Another season of Big Love! That's fantastic news! It really does get better every season (although I don't know how they'll be able to top the current season as it's been truly incredible).
2/05/2009

Anonymous said…
I hope Anna Friel takes Eastwick and it gets picked up!
2/05/2009