Little Boxes: Birth, Death, and Everything in Between on "Big Love" 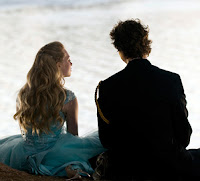 I originally watched last night's episode of Big Love ("Prom Queen") late last year but when I rewatched it last evening, I was once again struck by the episode's beauty and grace and the undercurrent of denial and despair that runs beneath its surface.

Written by Eileen Myers and directed by David Petrarca, "Prom Queen" ranks as one of my favorite episodes of Big Love to date, as it escalates the intersecting storylines of Roman's trial, Nicki's deception at the DA's office, the fractured marriage between Joey, Wanda, and Kathy, the murderous standoff between Lois and Frank, and some long-buried secrets about just what happened to Bill's sister Maggie... and what may have happened to Nicki as a teenager on the compound.

The episode is really at its heart about the nature of denial, the cardboard boxes that the characters all shove into the back of their closets in their own way. For Sarah, it's the belief that she can push her troubles out of her mind and have one shining moment of happiness by attending the prom with Frankie, Ben, and Heather. For Nicki, it's that she can pretend she wasn't forcibly married at the age of 15 to a man she hated. Ana attempts to reconcile her need to control something with her desire to join the Henricksons in plural marriage, while Barb tried to endure the spite of her sister in order to secure her family's future but finds that she just can't stay silent about the grandfather clock she was promised. Margene scrubs the house in order to distract herself from dealing with her mother's death and puts Ginger's ashes on the top shelf of her closet. Out of sight, out of mind, right?

And yet that's not always the case. Things have a nasty habit of resurfacing at the most unexpected of times. Lois can't bring herself to speak when Bill demands to know the truth about Maggie's suicide, a secret she had carried inside for decades, and breaks down on the phone with Bill; it's a moment of supreme clarity and relief for a woman prone to scheming and conniving rather than telling the truth. (That she happens to do while in the process of suffocating her no-good husband Frank is just the icing on the cake.) Key prosecution witness Kathy is forced to speak out about her marriage to Ron at the age of 14 and how she pleaded with Roman to not force her to consummate her marriage before she was ready.

Wanda unearths one of Nicki's own secrets: that she too was forcibly wed to J.J., a man she loathed, when she was 15, though Roman later unsealed her. That she kept this from Bill only further highlights her shame over the incident; she still can't bring herself to admit that it actually happened. And yet, posing as Margene in her job at the DA's office, Nicki comes face to face with something that can't be denied: her presence in the compound's joy books. The look of supreme sadness and humiliation when she sees herself in those pages was absolutely heartbreaking. The devotion to which she practices her religion is clearly at odds with her own experiences as an adherent... and it gives new meaning and weight to her own manipulations, clearly an effort to exert some control over a world that has restricted her own liberty. Obedience is clearly not the freedom that Roman preaches. And the tears she sheds in the arms of her boss Ray (The Office's Charles Esten) are painfully real.

Meanwhile, poor Wanda can't bare the thought that Joey loves Kathy more than her and attempts to drown herself in a scene that's set to the most haunting of piano music, a theme that turns up several times in this heartbreaking installment.

I am glad that Sarah told Ben that she was pregnant in a poignant scene set to Alphaville's "Forever Young" that has remained with me the past few months since I first saw the episode. The look of serenity on Sarah's face as she tells Ben not to say anything and just let her enjoy the moment as the sun comes up is clearly at odds with the difficult decisions that lie ahead for Sarah. The sun might be coming up but it looks like there will definitely be darkness ahead for the most tragic figures in the series.

As for Bill, he says that he's "moved mountains" in order to keep his family out of Roman's trial, even going so far as to tamper with a witness by putting Rhonda on a bus. But when faced with the truth about Maggie and about Nicki, there's no way that he can deny what's actually going on: that this trial isn't about staying silent and pretending that he's not involved but by admitting that Roman is evil and his actions illegal and morally wrong. He tells Kathy that one person can't hope to bring down Roman's corrupt and venal rule over Juniper Creek but all it takes is one person to stand up and tell the truth. And at the episode's end, Bill realizes that he has to help Kathy and undo the wrong that he has himself gotten entangled in.

All in all, "Prom Queen" is an exceptional installment of Big Love that advances the plot of the last three seasons, answers some long-standing questions, and looks towards the future and the sunrise.

Do we think that Lois went through with her murder of Frank? Will Sarah attempt to keep the baby? Will Kathy Marquart make it to the witness stand? Did Wanda truly mean to kill herself in the pool? Will Roman go free and plot revenge against the Henricksons? Will Ana make the leap with Bill and the wives? Discuss.

Next week on Big Love ("On Trial"), Nicki is tested by her devotion to her father and her commitment to obey Bill; Bill urges the DA to offer protective custody to Kathy and Rhonda and offers a truce with Alby; Lois turns to Bill for sanctuary after fleeing the compound; Adaleen track down Rhonda; Barb asks her mother for financial help; Sarah considers her options.

Anonymous said…
This season has been incredible and this episode was truly one of best hours of a family drama I've ever seen. There were so many heartbreaking moments - Ana telling Barb that she's most sorry about hurting her... Wanda asking Joey if he loves Kathy more than her... Nicki tearing her picture out of the joy book... Rhonda begging Frankie to take her with him as they pull away in the limo... and Sarah telling Ben she's pregnant as the song Forever Young closes out the episode. Whew! That's some truly exceptional storytelling!
2/02/2009