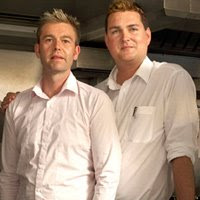 Challenged to create a menu for a bustling lunch service at a busy motorway service station and market their concepts to the public, the couples were split into three teams on the task, with one restaurant to be closed for good by Raymond at the end of the Challenge.

I thought that this was a fantastic way for Raymond to truly see the couples under intense pressure, out of their normal comfort zones in their own restaurants, and forced to deal with a specific clientele at a very specific location. It would also allow the cream to rise to the top as there was no way to come out of this task without proving to Raymond that they had the requisite passion and drive to make it in this cutthroat industry.

I thought that Harriet and Mike did a fantastic job. Mike proved his worth to his team by demonstrating some marketing finesse, using blue footprints on the floor of the station (leading to their counter) and having Alasdair dress up as a blue emu (in honor of their namesake Blue Goose) in order to get the punters in. I was worried that Harriet's decision to photograph pre-made and purchased food on their promotional materials (rather than make the dishes herself) would come back to haunt them, even on a technicality level, as such a practice is actually illegal. (I was surprised, however, that Harriet didn't say that it was actually Helen's idea to do so.) Food photography and food styling is definitely an art form in itself but it was another example of this duo trying to out-think the competition by cutting corners (as in last week's episode when they only served 13 guests in order perfect service). Points deducted for not having a meat offering, serving the fish pie in a trough rather than in individual ramekins, and for serving those tennis ball-like deep fried children's fish cakes under the guise of a "healthy kids' meal." Ick. Still, I am glad that this father and daughter team will remain in the competition as I still don't really have a feeling about the strength or weakness of Harriet's actual cooking yet.

Russell can cook and definitely had the best tasting offerings on during this Challenge. Sarah Willingham distinctly seemed pleased with the taste and substance of Russell's dishes, such as his children's fish pie and the beef lasagna. The marketing however, which fell to Michele to carry out, was abysmal: consisting of Michele handing out Cheerful Soul stickers to kiddies. And they don't seem to be able to prioritize very effectively, either. With only 40 minutes of time remaining before they had to be done cooking and photographing the food, Russell seemed to be helping Michele order some containers on the phone rather than getting on with the cooking. And sure enough they only managed to get three of their dishes photographed in time rather than the required five. Badly done. Raymond reamed Michele for this later and finally cut her off when he got tired of her excuses. These two seem like a nice enough couple but I'm not really convinced that they can hack it in the restaurant business.

And there was Richard and Scott of Sorbet & Seasons. I had a feeling that they would be going home even before the Challenge began and they didn't disappoint as they completely mishandled the task at hand, not getting the correct information out of the motorway service station rep and not asking the right questions. The coq au vin did look a "prehistoric" mess, to paraphrase inspector David Moore. And the carrot cake was an absolute fiasco. Plus, they didn't individually portion and had ordered an excessive amount of food as they never found out how many people to actually cook for. Plus, their marketing scheme of handing out sorbet to people wandering into the station in search of lunch was misguided from the start. If they wanted to showcase sorbet (a surprise anyway since they never seemed to want to at the restaurant), they should have offered it as a free dessert with the purchase of lunch. Easy peasy.

So it certainly wasn't a shock when Raymond declared that he would be closing Sorbets & Seasons. While Richard and Scott may have been absolutely charming, they were so out of their depth in the restaurant business and, even to me, didn't seem to have the killer instinct or zeal for this vocation.

What did you think? Would you have sent home Richard and Scott? Did Harriet and Mike make an egregious and unforgivable error by using someone else's food in those marketing photographs? Who are you rooting for to win the grand prize? Discuss.

Next week on Last Restaurant Standing ("No Waste, No Loss"), the seven remaining teams must prove to Raymond and his inspectors that they don't waste food by using every single part of an organic pig from head to tail while making appetizing dishes.

Danielle C.F. Maris said…
Scott and Richard both seemed bewildered by the restaurant industry. I don't think they had a clue about what they were getting into and I'm very happy that it was their ludicrously named restaurant that Raymond shut this week.

I was also glad to see Mike and Harriet finally pull it together. They did have some missteps but improved greatly in this challenge and I look forward to seeing what they can now do in their own restaurant.
2/11/2009

Ally said…
I finally watched. I am not surprised at all that Harriet didn't blame Helen for the photography faux pas, but I AM surprised that Helen didn't step up and take the blame. I like Helen, but I thought that put her character into question a bit, while at the same time telling me a lot about Harriet's character.