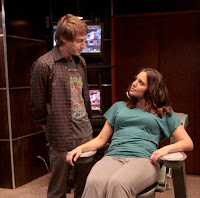 Dollhouse creator Joss Whedon will write and direct the second season opener of the FOX drama. Meanwhile, Miracle Laurie--who played November/Mellie in Season One of Dollhouse WILL be returning for the sophomore season... in some form, anyway. "All I know for sure is that I'm coming back next season," Laurie told the Baltimore Sun. "I don't actually know in what form I'll be back. The writers are kind of teasing me…everybody knows but me." (Baltimore Sun, Twitter)

io9 speaks to Syfy vice president of original programming Mark Stern about the channel's rebrand and its promise to find the next big space opera along the lines of Battlestar Galatica or Firefly. "The next thing that I really want to do is find the next great space opera; it's been a long time," said Stern. "And we have Stargate, but that's really not that show. And Caprica isn't really that show. So where's the next Star Trek or Farscape? Let's find one of those... We don't want to do something that is the same old. You don't want it to feel recycled. So that's the challenge of doing that. I'm a huge fan of Firefly, and shows that take that idea and take that part of the genre and reinvent it in a whole new way. I'd love to find our version of, not specifically Firefly, but similar to what Joss [Whedon] tried to do with that in terms of, "lets recast the Western in space." Love that idea, and I love that show. What's another way to approach that?" (io9)

The Unusuals' Terry Kinney has been cast in Season Two of CBS' The Mentalist, where he will recur as Sam Bosco, "a by-the-book California Bureau of Investigations agent who heads up the division overseeing the Red John case." According to Entertainment Weekly's Micheal Ausiello, Bosco is an ex-lover of Lisbon (Robin Tunney) as well as her mentor and "[t]he two share a deep, dark secret!" (Entertainment Weekly's Micheal Ausiello)

CSI creator Anthony Zuiker's Dare to Pass shingle has signed a new two-year first-look deal with CBS Television Studios, under which he will develop scripted and unscripted series. "Making a one-off TV show is not going to sustain a real business anymore," said Zuiker. "It starts with a great TV show, but then becomes a 24/7 experience. It's Web, mobile, gaming. From device to device to device." (Variety)

FOX has given a script commitment with a penalty to an untitled dramedy project, from Greg Malins (How I Met Your Mother) and mystery novelist Harlan Coben, about a psychotic former private investigator with a lack of inhibitions (the result of a bullet wound to his frontal lobe) who teaches a university criminology class in Los Angeles and solves crimes with his graduate students. Project hails from 20th Century Fox Television, where Malins has an overall deal. (Hollywood Reporter)

Bravo has announced an August 26th start date for Top Chef: Las Vegas and unveiled the seventeen contestants competing for the title next season as well as the guest judges, who include such notables as Natalie Portman, Wolfgang Puck, Daniel Boulud, Tyler Florence, Penn & Teller, and Nigella Lawson. (Televisionary)

More off-net sales for NBC comedy 30 Rock following a deal between NBC Universal Domestic Television Distribution and FOX and Tribune station groups on an all-barter basis, with the series launching in fall of 2011. 30 Rock will be "double-run six days a week in access and late-fringe time periods," with NBC Universal getting three minutes of ad time and local stations getting four minutes. (Broadcasting & Cable)

Lifetime has unveiled the identities of the contestants for Season Six of Project Runway, which makes its long-delayed debut on the cabler on August 20th following a protracted legal battle with rival cabler Bravo. (Hollywood Reporter)

Lifetime has acquired rerun rights to CBS' The New Adventures of Old Christine after it closed a deal with studio Warner Bros. Television for roughly $350,000 per episode for the series as well as a barter agreement that will see the cabler hand over 90 seconds of advertiser time. Series will debut on Lifetime in fall 2010. (Variety)

BBC America has announced the US premiere date for Season Three of teen drama Skins, which will kick off on Thursday, August 6th at 9 pm ET/PT. (via press release)

NBC opted to shift its newest reality series The Great American Road Trip to Mondays at 8 pm, less than 24 hours after it launched the series. Repeats of America's Got Talent will take over the Tuesdays at 8 pm timeslot. (Futon Critic)

Rufus said…
RE: Syfy's search for the next space opera...I wish they could just bring Firefly back. It was such a brilliant show and its run was cut way too short.
7/09/2009

rockauteur said…
Kind of annoying Miracle Laurie is back - they ran the course with her character on Dollhouse - and doesn't really make sense why they would bring her back since her term of service at the Dollhouse is over... Unless she becomes a handler for some reason, which is kind of dumb.
7/09/2009

wooster182 said…
Maybe November won't be able to cope with being herself again and will have to come back to the Dollhouse, like a bad after effect. They do need a new Dr. Saunders now if Amy Acker is moving to Happy Town or whatever. And since we now know that Saunders is a personality, they could put it in anyone.
7/10/2009