With the sixth and final season of Lost looming, executive producers/showrunners Damon Lindelof and Carlton Cuse made their annual trek to Comic-Con for what is likely the last Lost panel at the convention. Ever.

In the tradition of hijinx-fueled Lost panels, this one was no different, with Team Darlton teasing some details about what to expect on the series while also offering attendees the chance to laugh until it hurt.

Given that the end of the series is so near, expectations ran high but our favorite Lost masterminds didn't disappoint, offering up a montage of fan-created video mashups (faves included Jack waiting for Xbox support, a Jack and Sawyer bit that reimagined them as Brokeback Mountain-style lovers, and a bit that recast the castaways as Muppet Babies), some newly created humorous videos including a "from our sponsor" commercial for Mr. Cluck's (starring Jorge Garcia's Hurley), an episode of America's Most Wanted featuring a still-on-the-lam Kate Austen, and a tongue-in-cheek look at the makeup preparation of Nestor Carbonell. There was also a "vintage" faux five-part documentary series Mysteries of Universe exploring the mythic Dharma Initiative, which can be viewed on ABC.com. (There was also a commercial for ABC's new online initiative LostUniversity.com.)

"Obviously, the biggest moment in the show's life was announcing its death," said Cuse, referring to the network's unprecedented decision to give the showrunners the end date that they desired and wrap the series up according to their wishes. And it was death that had many in the crowd just wondering what lies ahead for this serpentine series.

For one, we'll be seeing many characters we haven't seen since Season One, including Boone Carlyle (Ian Somerhalder) and many others who have perished on the series since they first crashed onto that accursed island. "We want the show to feel like a loop is closing with this final year," said Lindelof. "There's a good chance you'll be seeing characters you haven't seen since the first season."

Or in their own words:

And death seems to be the key. Lindelof and Cuse also confirmed that Jeremy Davies' much beloved Daniel Faraday, who seemingly perished by gunshot, WILL be in Season Six of Lost... as will Elizabeth Mitchell's Juliet, who detonated the hydrogen bomb in the Season Five finale "The Incident," which likely will explain just how the dead are among us again. ("Elizabeth Mitchell will be in Lost during the final season," said Cuse.)

(Worth noting: an In Memoriam video screened at the panel showed the massive body count from over the years but did NOT actually include Elizabeth Mitchell's Juliet or Emilie de Raven's Claire. Hmmm....)

The series' final season will in some ways resemble the first--"[Characters] were running around the jungle, things felt intense and surprising," said Cuse. "We have a way that we're going to be able to do that in the final season too."--yet there will also be a new narrative technique unveiled in the final go-around. "The time travel season is over, the flash forward season is over," promised Lindelof. "We're going to do something fairly different."

We'll finally get some of the backstory of the enigmatic Richard Alpert (Nestor Carbonell). "We would be incredibly remiss if we didn't give you Richard's backstory before the end of the series," said Carlton Cuse. 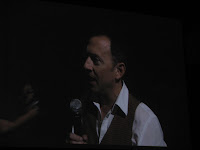 Michael Emerson was asked whether the black-clad man seen on the beach with Jacob in "The Incident" was named Esau. Emerson was characteristically coy about answering the question.

Who made the food drop in Season Two? "It comes from planes," said Jorge Garcia, fielding the question. Lindelof said it will likely be dealt with in the series' final season.

Some other hysterical moments from the panel:

Lost returns for its final season in 2010.

rockauteur said…
Very interesting in the AMERICA'S MOST WANTED video that Kate didn't kill her stepfather....
7/26/2009

Kelsey said…
Aaaah! I wish I could have been there. Sounds like it was a riot! Thanks for all of the great clips and tidbits!
7/27/2009