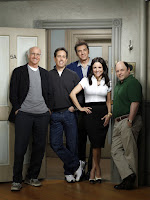 The cast of Seinfeld will reunite for a look at what happened to their characters eleven years after the end of Seinfeld's run on NBC. Sort of, anyway.

The reunion is actually a major storyline threaded through the upcoming seventh season of HBO's Curb Your Enthusiasm, which launches on September 20th. The cast of Seinfeld, including Jerry Seinfeld, Julia Louis-Dreyfus, Jason Alexander, and Michael Richards--will each appear in approximately five episodes apiece on Curb this season as the fictional Larry David gets the cast together for a reunion special.

"For years, I've been asked about a Seinfeld reunion... and I would always say no," David told reporters at yesterday's Television Critics Association Summer Press Tour gathering about the impetus for the idea. "It's a lame idea. But it might be very funny to do on Curb."

Given David's disinclination from staging a Seinfeld reunion, just does the fictional Larry David give in and decide to do a Seinfeld reunion? David promises this very point will be addressed in an episode of Curb. Asked whether the fictional Larry David would seek to derail the reunion, David played coy: "My guy might consider wrecking something like that. My guy could very well wreck it."

David told reporters that we'll see the "writing, read-throughs, rehearsals, shooting, and the finished product" of the Seinfeld reunion... on Curb via the Seinfeld reunion show-within-a-show, which will give viewers a look into what happened to the characters in time since the Seinfeld series finale.

The storyline will be "scattered throughout" the season and will provide this season's spine, leading up to the Curb season finale, which could be a one-hour installment, according to David. (He'll have a better idea once he finishes editing it.)

David wouldn't confirm that Michael Richard's recent brush with notoriety will be dealt with on-camera on Curb, but he also didn't deny it either. (Read: look for it to be dealt with head-on by David.)

"We'll be picking up this season where last season left off with some lapse of time," said David about the beginning of the seventh season. "I won't tell you how that works out but [the Black family] will be back."

David went on to say that Vivica A. Fox's Loretta will be back as will J.B. Smoove's Leon, who was seen in the hysterical trailer that HBO assembled for Curb's seventh season.

So are Larry and Loretta still dating? David was extremely tight-lipped. "There's a little dating," he said. "I think there's two dating shifts and they were fun."

And the real question: will Cheryl Hines be returning for Season Seven? According to David, Cheryl is "back in it." No elaboration there from David, though Hines was seen in a scene with the fictional Larry in the Curb trailer. The state of their fictional marriage (or separation) remains to be seen.

What we do see in the trailer is Larry attempting to make out--painfully--with a woman in a wheelchair, attempting to open a plastic container, making sure his mobile phone is safe before rushing into the ocean to save Jeff and Susie's daughter Sammy, screaming at a woman on the street who tells him to "smile," Susie kicking Larry out of her house for the umpteenth time, killing a golf course swan, and a host of other awkward, uncomfortable, and painfully funny scenarios.

David said that Rosie O'Donnell is hilarious in the season's fifth episode. "She is a riot," said David, whose character is seen tangling with O'Donnell over a lunch check. "She is a force. She is very formidable physically."

As for the outrage he experiences in attempting to open the aforementioned plastic packaging, David said: "That packaging is insane."

David admitted to watching Gossip Girl with his teenage daughters. He smirked when asked what he thinks of the CW series and then whispered that the characters are "very breathy."

"Would I prefer they watch Seinfeld or Curb?" said David. "Yes! They don't seem to be fans of mine. Go figure."

Still, David admitted that the real-life Larry David and the fictional Curb Larry David are "melding together a little." "I am becoming a little happier," he said smirking.

And after blowing kisses to the journos, David left the stage. A happier Larry David? Might just be possible, after all.

AskRachel said…
Doing a Seinfeld reunion on Curb is brilliant!
7/31/2009

tvcontents said…
Indeed, Seinfeld is a nice TV series to watch. All the other TV contents seem to be so boring and senseless.
8/07/2009