The Heavens Themselves Blaze Forth: Televisionary Talks with "Torchwood" Executive Producer Julie Gardner

Throughout her storied career and tenure at BBC Wales, executive producer Julie Gardner has had her hand in the development of several of the United Kingdom's most hallowed drama series, from Doctor Who and Torchwood to Life on Mars.

Recently relocated to Los Angeles to take up a position at BBC Worldwide Productions, where she was reunited with BBC drama commissioner Jane Tranter, Gardner is about to bring her own inimitable style and story sense across the pond.

I caught up with Gardner yesterday to talk about Torchwood: Children of Earth, which airs next week on BBC America (you can read my advance review here), Doctor Who's Matt Smith, and her new scripted development position here in LA.

Televisionary: Given the strength of the ratings in the UK last week during Torchwood: Children of Earth's run it definitely seems like a bona fide hit. Can you tell us what the thinking was behind the decision to structure this season as a five-episode story arc rather than a traditional thirteen and then strip them across five nights?

Julie Gardner: The thinking was an editorial one. We have started our life in the UK on BBC Three, the second series then moved to BBC Two, and at the end of that one we knew we were going to have the chance to move to BBC One. The discussion between Russell, myself, and the then drama commissioner Jane Tranter was really about how to create an event out of Torchwood by moving to BBC One and how to really look at how to bring in a new audience while hopefully rewarding the audience that we had had on the previous two years.

Alongside all of those conversations, Russell had always wanted to do a big serial arc story and so rather than doing the balance of stories of the week with a tiny serial arc, he was quite interested in one big storyline. At the BBC, they had transmitted--or were about to transmit--Criminal Justice across a week and a previous title, Five Days, had also had a similar kind of event slot. It felt like a very good fit to take a week out of the schedule and attempt to tell a really big political thriller, if you like, with sci-fi content.

Televisionary: Does the success of this scheduling strategy make you more inclined toward taking risks with future nontraditional formats?

Gardner: Yes, I think the joy and exciting thing about Torchwood is in some respects it's a show that year on year changes its shape because we've moved across three channels across three years, because we've experimented with how dark we are, how mainstream we are, how much story arc versus how much story of the week, I think it's a title that, by its history, can change itself. And I think that makes it very exciting and very fresh.

Televisionary: You used the work "experiment" and one of the things that I found remarkable about Torchwood: Children of Earth is that it manages to conflate several genres--sci-fi, political thriller, social drama--into one series. How would you describe Torchwood: Children of Earth as a whole and what specific issues did you and Russell set out to capture with the storyline?

Gardner: Ah, it's hard to boil it down into one thing but I think maybe the topline headline I would offer is that it's a first contact story told in a very real way. So it's not a first contact story told in an action-adventure, straightforward way. It's an examination of what are the potential real consequences of this if that first contact is also a threat. I think for Russell, it's also looking at a world where we are always watching the news and seeing terrible things that happen and looking at, well, what could take the world to that point.

I think, for me personally, what I love about Children of Earth is how we look at the characters, all with families of their own. I think that's quite a departure from previous years. So we're looking at Ianto with his sister and his nephews and nieces; we're looking at Gwen, pregnant; we're looking at Captain Jack and his family situation. And in a five-part serial that has children at risk and a threat transmitting through children, it becomes a mix of very big global stakes with a very personal flavor and consequence.

Televisionary: Children of Earth features an incredible array of supporting cast members. How did you assemble such an amazing cast?

Gardner: They were fantastic, weren't they? It's two things, really. It's a tribute to the quality of the writing because people were reading script and really wanted to do them. It's also our great casting director, Andy Pryor. Andy works across Doctor Who, Torchwood, and The Sarah Jane Adventures. He's worked with me on so many titles and he is extraordinary at his job. So I think it was a combination of a really good casting director and script and a director, Euros Lyn, who's absolutely fantastic with actors.

Televisionary: Were you at all surprised by how charismatic and magnetic newcomer Cush Jumbo, who plays Lois Habiba, was in Children of Earth?

Televisionary: Given that you're now over here in Los Angeles with BBC Worldwide Productions--

Televisionary: We're very happy to have you over here in LA.

Gardner: Thank you very much. The weather is considerably better. (Laughs)

Televisionary: I'm wondering, how likely is it that Torchwood will continue after the five-part transmission of Children of Earth?

Gardner: Um, we're having conversations now. We don't have any firm decision. We don't quite know what we're going to do next. But we're thinking about what could be the next editorial offering, so all I can say at this moment is: hold this space. 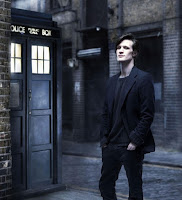 Televisionary: Doctor Who is itself undergoing some transformations of its own this year. Two words: Matt Smith.

Gardner: Hurray! (Laughs) Matt is marvelous, absolutely marvelous. I can take no credit for his casting. As you well know, I finish on Doctor Who at the end of David Tennant's years and at the end of Russell's. I know Matt's work from the UK and I think he's an exceptional actor.

I think from Christopher Eccleston to David Tennant and now Matt Smith, the thing in common is that they are three great, versatile, talented actors so I am very excited to see what he brings to the role.

Televisionary: Speaking of which, you recently relocated to work for BBC Worldwide America here in LA. What does your new position entail and what does it mean for sci-fi programming?

Gardner: I'm working for BBC Worldwide Productions, which is the commercial arm of the BBC. It's the division that has made Dancing with the Stars, so it has had some success in reality formats. I'm here to look at scripted and I'm here to look at new ideas for American networks and cable companies and to also look at reformats of UK titles. It's a privilege to be here, it's a really exciting time for me. I love American TV.

What it means for sci-fi, I don't know yet. I'm five weeks in and the thing I'm concentrating most on is the word "merge" on the freeway.

AskRachel said…
Thank you for the great interview, Jace. I have a lot of respect for Gardner (she's been involved with some of my all time favorite UK shows!) and am looking forward to seeing what she does here in the US.
7/15/2009

Greer said…
Enjoyed the interview and am very happy (and relieved) to hear that they are considering another season of Torchwood. Fingers crossed!
7/15/2009

Unknown said…
I adore Julie. While I'm sad to see her run in the UK end, I'm really excited for what she can bring to us her in the States. As for Torchwood...I've seen CoE and all I could think at the end was "where do we go from here?" Fantastic piece of television for sure but it really seemed like the end, you know? But if they can come up with a good way to do it, then I'm all in for a fourth series.
7/15/2009

Anonymous said…
Can't wait for part 2! I've already seen CoE and have had no one to lament and discuss with. I need a Torchwood board, since no one I know watches it. CAN'T wait for the DVD's!
7/15/2009