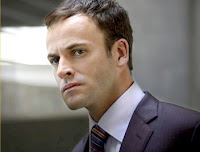 Showtime's Dexter is on a casting role. Variety's Stuart Levine is reporting that Jonny Lee Miller (Eli Stone) is the latest to board the serial killer drama, signing on to appear in a multiple-episode story arc on Season Five of Dexter. Miller will play "a mysterious man who ends up tangled in a storyline with Julia Stiles, who is beginning her first season on the skein." (Variety)

Entertainment Weekly's Michael Ausiello is reporting that Jordana Spiro has exited NBC's midseason romantic anthology series Love Bites. Spiro's participation in the series was always in second position to her role on TBS comedy My Boys, which returns for its fourth season next month. "Although the odds appear slim that TBS will renew the show for a fifth season (season 4 premieres July 25), it was a risk NBC apparently wasn’t willing to take," writes Ausiello. "It’s unclear if her role will be recast." (Entertainment Weekly's Ausiello Files)

Elsewhere, E! Online's Jenna Mullins has an interview with Spiro about Season Four of My Boys. "PJ has to deal with moving on to the next level with her relationship. She and Bobby start living together," said Spiro. "When you start getting a little too comfortable with your significant other, the new video game becomes more exciting than the new piece of lingerie." (E! Online's Watch with Kristin)

In surprising news, Robert Greenblatt has stepped down from his role as Showtime Networks president after a seven-year run and will be succeeded by former Imagine TV partner David Nevins. "Though the executive shuffle came down just this week, sources portrayed Greenblatt's decision as a long time in the making," writes The Hollywood Reporter's James Hibberd. "It's unclear if the network's corporate communications chief, Richard Licata, who's worked with Greenblatt for 16 years, will opt to continue at the network in the wake of the entertainment president's departure." (Variety, Hollywood Reporter)

Could the Beeb be resurrecting Philip Glenister's Gene Hunt once more? According to The Daily Mirror, the BBC is contemplating whether to develop a new series that would be set in the present day and revolve around Glenister's fiery Gene Hunt character from Life on Mars and Ashes to Ashes. No word on whether the rumors are in fact true or just that: rumors. [Editor: personally, I thought given the perfection of the ending of Ashes to Ashes, that Gene's storyline was nicely tied up. But...] (via Digital Spy)

Vulture's Emma Barker has a speed round with Party Down and Parks and Recreation star Adam Scott in which he discusses everything from prosthetic penises (cough, Tell Me You love Me, cough) to Matthew McConaughey-esque catch phrases, all in his inimitable style. (Vulture)

Digital Spy's Catriona Wightman is reporting that Doctor Who head writer/executive producer Steven Moffat has asked Russell T Davies to pen an upcoming episode of Doctor Who. But will it happen? "He's pretty adamant that he's not going to," said Moffat. "He did an awful lot of Doctor Who for an awful lot of years, and I think he's finding it in a way hard, because he's done a Doctor Who story in effect for Sarah Jane Adventures. So I think he probably wants to get away from it for a bit. I can understand that, because he did a hell of a lot. But I'd love to get him back, it would be just joyous to get him back because I miss him." (Digital Spy)

No surprise: Andy Richter will be making the move with Conan O'Brien to TBS this fall. "I'm doing the TBS Conan show because I went back to work for Conan on The Tonight Show," Richter told Variety's Michael Schneider. "But that story ended unnaturally... I didn't want them to end that story of me and Conan getting back together. I had come back to work with a friend." (Variety)

Entertainment Weekly's Michael Ausiello talks to Weeds star Mary-Louise Parker about the departure of Elizabeth Perkins from the cast of the Showtime dark comedy series when it returns for its sixth season on August 16th. "It's really sad -- really said," Parker told Ausiello. "I just can’t think of a single negative thing to say about Elizabeth Perkins. I’m sure there are many because she’s a human being, but I worked with her for [five] years and she was a wonderful person in the morning and she was a wonderful person when you worked an 18-hour day." (Entertainment Weekly's Ausiello Files)

Rob Lowe (Parks and Recreation) has teamed up with reality shingle 44 Blue to produce a new unscripted series that is set in Washington, D.C. and which will focus on "real-life aspiring politicos as they look to move up the ranks of power in the nation's capital." (Variety)

TLC has ordered eight episodes of an untitled reality competition series spinning off of its successful Cake Boss franchise in which ten aspiring cake makers will compete for an apprenticeship at Carlo's Bakery. Production on the series, from High Noon Entertainment, is slated to begin in September. (via press release)

VH1 has ordered a pilot for Office Bonus, in which "office workers battle for a $50,000 bonus" as they are locked in their workplace for 72 hours and must convince their co-workers to give them the cash bonus. Project, from 3 Ball, is executive produced by JD Roth, Todd Nelson, and Adam Greener. (Hollywood Reporter)

A&E has given an pilot order to unscripted series The Incurables, which will focus on British self-help guru Paul McKenna as he attempts to help people with severe psychological or physical problems. Project, from Ryan Seacrest Productions and McKenna Media, will be executive produced by Ryan Seacrest, McKenna, and Sam Mettler. (Variety)

TV Land is developing an untitled docusoap that will revolve around George Hamilton, his adult son Ashley, and his ten-year-old son George, as they move in together in Los Angeles. (Hollywood Reporter)

gretchen e. said…
I love My Boys--I didn't realize Jordana Spiro was actively doing any other work. That's unfortunate to hear that she had scheduling conflicts.
6/25/2010

Debbie said…
I love My Boys too, but Spiro was a very main character in Love Bites. The quality of My Boys has been going downhill, so it is unfortunate for her to have been forced to bail the NBC show. If Love Bites is not better than the pilot, however, she might have dodged a bullet. I personally am scoring LB a mid-range 5 and will wait and see what the masses think before scheduling live or VCR time for it. Though I like both Newton and Spiro as their past TV characters, this show looks more like a pathetic 2010 "Romantically Challenged" than a classic 1998 "Cupid" from Rob Thomas (which I adored).
6/28/2010