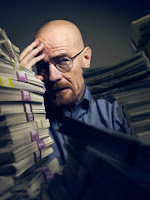 It's now super-duper-official: AMC has announced that it has renewed drama series Breaking Bad for a fourth season.

The cable network today issued a press release that confirmed earlier reports that the Sony Pictures Television-produced drama series, which stars Bryan Cranston and Aaron Paul, had been renewed for Season Four. News comes on the heels of the series wrapping its third season last evening.

“AMC’s Breaking Bad is one of the most layered and intense dramas on television today,” said Joel Stillerman, Senior Vice President of original programming, production and digital content, in a statement. “The critical acclaim and strong audience growth we’ve seen in season three reinforce that this is the kind of exceptional original storytelling AMC has become known for providing to audiences. Vince Gilligan and his team deliver bold storylines that truly push the psychic envelope and create a mesmerizing, exhilarating television experience. We look forward to an incredible fourth season.”

"Through its captivating storytelling, inspired performances and breathtaking visuals, Breaking Bad delivers on all levels and it's a show we're v ery proud to have in our portfolio," said Sony Pictures Television's president of programming, Zack Van Amburg.

The full press release, jointly released by AMC and Sony Pictures Television, can be found below.

New York – NY, June 14, 2010 – AMC announced today the renewal of its Emmy® Award-winning and critically acclaimed drama series “Breaking Bad” for a fourth season, continuing the network's momentum in delivering the best original storytelling on television. From acclaimed writer/producer/director Vince Gilligan (“The X-Files”), the series follows the story of a desperate man who turns to a life of crime to secure his family’s financial security. “Breaking Bad’s” first two seasons awarded Bryan Cranston the Emmy for Outstanding Lead Actor in a Drama Series, which marked the only time an actor from basic cable has ever been recognized with back-to-back Emmy Awards.

“AMC’s ‘Breaking Bad’ is one of the most layered and intense dramas on television today,” said Joel Stillerman, Senior Vice President of original programming, production and digital content. “The critical acclaim and strong audience growth we’ve seen in season three reinforce that this is the kind of exceptional original storytelling AMC has become known for providing to audiences. Vince Gilligan and his team deliver bold storylines that truly push the psychic envelope and create a mesmerizing, exhilarating television experience. We look forward to an incredible fourth season.”

"Through its captivating storytelling, inspired performances and breathtaking visuals, 'Breaking Bad' delivers on all levels and it's a show we're v ery proud to have in our portfolio," said Zack Van Amburg, President, programming for Sony Pictures Television.

“Breaking Bad’s” third second season premiered on Sunday, March 21 to the highest ratings ever for the series. Variety “qualified ‘Bad’ as one of TV’s best dramas.” Newsday said, “this show - still TV's best - remains utterly true to itself.” TV Squad heralded, “all things considered, AMC has a lot to be celebrating. Both ‘Mad Men’ and ‘Breaking Bad’ are two of the best -- no, they are the best -- shows on television.” “The writing is among the very elite in television,” according to the San Francisco Chronicle.

“Breaking Bad” follows protagonist Walter White, a milquetoast high school chemistry teacher who lives in New Mexico with his wife and teenage son who has cerebral palsy. White is diagnosed with Stage III cancer and given a prognosis of two years left to live. With a new sense of fearlessness based on his medical prognosis, and a desire to gain financial security for his family, White chooses to enter a dangerous world of drugs and crime and ascends to power in this world. The series explores how a fatal diagnosis such as White’s releases a typical man from the daily concerns and constraints of normal society and follows his transformation from mild-mannered family man to a kingpin of the drug trade.

About AMC
AMC reigns as the only network to ever win the Golden Globe® Award for Best Television Series - Drama three years in a row and the only basic cable network to win back-to-back Primetime Emmy® Awards for Outstanding Drama Series. Whether commemorating favorite films from every genre and decade from the most comprehensive library or creating acclaimed original productions, the AMC experience is an uncompromising celebration of great stories. AMC's original stories include the Emmy® Award-winning dramas Mad Men and Breaking Bad, and insightful non-scripted programming such as AMC News. AMC further demonstrates its commitment to the art of storytelling with curated movie franchises like AMC Hollywood Icon and AMC Complete Collection. Available in more than 95 million homes (Source: Nielsen Media Research), AMC is a subsidiary of Rainbow Media Holdings LLC, which includes sister networks IFC, Sundance Channel, WE tv and Wedding Central. AMC is available across all platforms, including on-air, online, on demand and mobile. AMC: Story Matters HereSM.

About Sony Pictures Television
Sony Pictures Television is one of the television industry’s leading content providers. It produces and distributes programming in every genre, including series, telefilms, theatrical releases and family entertainment around the world and for every platform: broadcast and cable television, first-run and off-network syndication and digital distribution. In addition to one of the industry’s largest libraries of feature films and television shows, SPT boasts a current program slate that includes the top-rated daytime dramas and game shows, landmark off-network series, original animated series and critically acclaimed primetime dramas, comedies and telefilms. Internationally, SPT is a leader in local language productions around the world, some of which are co-produced with local partners, and sells SPE-owned formats in approximately 70 countries. To better serve its clients and partners worldwide, SPT maintains offices throughout the world, including Argentina, Australia, Brazil, Canada, France, Germany, Hong Kong, Hungary, India, Italy, Japan, Korea, Mexico, the Netherlands, the People’s Republic of China, Russia, Singapore, Spain, Venezuela and the United Kingdom. SPT's worldwide television networks portfolio is a key strategy in SPE's long-range commitment to the global marketplace, with 122 channel feeds, which are available in more than 140 countries reaching almost 438 million households worldwide. SPT also creates original content for and manages SPE’s premium video website, Crackle. Additionally, SPT is a part owner of cable channel GSN, FEARnet, the premier horror/thriller website and VOD service, and national media sales company ITN Networks, Inc. SPT advertiser sales is one of the premiere national advertising sales companies, handling the commercial inventory in SPT’s syndicated series as well as in all of SPE's digital businesses in the United States. SPT (www.sonypicturestelevision.com) is a Sony Pictures Entertainment company.