A Neighborhood of Voluntary Spies: An Advance Review of the Series Premiere of USA's Covert Affairs 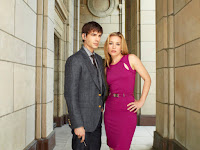 USA has been on a winning streak with lightweight, middle-of-the-road dramedies, so there's no reason the cabler should give up on a formula that's clearly working, even when the series in question revolves around the intelligence forces in a post-9/11 world.

The cabler's newest addition to its stable of breezy dramas is Covert Affairs, which launches tonight with a 90-minute pilot that introduces CIA trainee Annie Walker (Coyote Ugly's Piper Perabo) as it pushes her right onto the front lines of the spy game.

Created by Matt Corman and Chris Ord, Covert Affairs seems from the very first few minutes to walk to walk in the stylish stilettos of ABC's Alias, giving Perabo's Annie a series of dangerous missions, a lukewarm cover story, and a sister (House and Big Love's Anne Dudek, wasted here) that she has to lie to in order to keep her safe.

But while Alias focused on an increasingly intricate overarching mythology, Covert Affairs wants to push in the opposite direction, ditching Rambaldi for run-of-the-mill procedural elements and giving Annie a haunted love life with a man who is definitely more than what he appears to be. There's also a lot more heavy-handed humor here, which will either make you beam with satisfaction or make you concerned about the safety of our country, given the setting.

In case you didn't already get the gist of the plot, here's the quick version: Annie Walker is a polyglot CIA trainee who is whisked out of basic training and thrust into a full flown assignment where she's required to speak Russian, wear a tight dress, and pretend to be a Washington call girl. She's assisted in her new gig by Auggie, the aforementioned blind CIA operative, with whom she shares some banter and a few drinks before the end of the episode.

Covert Affairs is a nice change of pace for USA in that it's more female-centric than any of the other USA series (other than, of course, In Plain Sight) and I think there's a nice chemistry between Perabo and Christopher Gorham, who plays blind CIA analyst Auggie Anderson. But Perabo at times seemed to be channeling Jennifer Garner in Alias, right down to the knowing and lippy pout, and I want to see her a little more at ease within the role.

I also had a difficult time believing certain aspects of the series, namely the fact that Auggie would be placed in such a visually-demanding position. Can he really use the braille-based computer system that quickly to source data? Isn't he at a severe disadvantage that he can't actually see the data on-screen? And might that not prove to be a liability at some point? I'm all for supporting the Americans with Disabilities Act but this seemed to me a bit of stretch too far. Surely, Auggie's skills could have come in handy elsewhere within the agency other than at a computer array?

As I mentioned earlier, while I adore Anne Dudek, the sister/family element of Covert Affairs felt grafted on and a bit tired to me. Every spy show tries to create this shroud of normalcy for the characters but it just felt too convenient and trite here... and likely to get very old, very fast. (Remember how painful the Will and Francie subplots got in the early seasons of Alias? Or how Francie was left with nothing to do except whine about opening her restaurant?)

Likewise, I didn't buy that Perabo's Annie--gorgeous, smart, and vivacious--would need to be fixed up by her sister Danielle in the pilot episode... or with such an obvious dud. (Had the guy been more stereotypically attractive, I would have maybe bought this a bit more easily.) There's a clear disconnect here between the way the audience perceives Perabo's character and the way that Danielle does in ways that go beyond the truth of her profession. (Danielle believes that she works at the Smithsonian but even that doesn't excuse the awfulness of her forced hook-up.)

However, I will say that I loved Peter Gallagher and Kari Matchett as sparring CIA spouses Arthur and Joan Campbell, and I hope that subsequent episodes continue to mine their relationship as a potential cautionary tale for Annie. While I have to question some of Joan's ensemble choices given her line of work (and the fact that she seems to require being perceived as a steely force to be reckoned with), I thought it an interesting angle to have the master spy succumb to feelings of jealousy and paranoia while it's Arthur himself who seems to either be very good at keeping secrets (a professional duty, after all) or is just absolutely cool as a cucumber (ditto). I'm hoping that subsequent episodes will focus more on their marriage and its inherent issues of trust and fidelity when two spies are married to both each other and their jobs.

Additionally, I'm intrigued by Eion Bailey's Ben Mercer and love that that's why Annie was pulled out of training at the Farm early in the first place... and I hope this develops into a full-blown serialized arc for the season. It more than likely will, given the clandestine string-pulling that got Annie transferred in the first place.

Before making up my mind definitively on Covert Affairs, I would be curious to see a second episode in order to determine whether there is more of a balance between the funny and the gritty, a hard line to walk in an espionage show where the protagonist is meant to be on the front line of national defense. Ultimately, I don't want Annie to be tortured or grim (or whip out a pink wig), but I also want to see her a little more centered and mature. If Covert Affairs wants to thrive, both Annie and the series itself could stand to grow up a little.

Glenn B. said…
Definitely looks like a wannabe Alias with less brains. And Piper Perabo ain't no Jennifer Garner.
7/13/2010

Summer said…
Seems like a cheap Alias with a dash of Chuck. I will check it out but am not planning to be wowed. (I am ready for Undercovers, though!)
7/13/2010

Page48 said…
I would be in favour of the scales tipping toward more grit, less funny. Matter of fact, I'd just as soon have "Alias" back, flaws and all.

What is the current obsession with dramedy? Even "Undercovers" doesn't hold much promise for "Alias" orphans.
7/13/2010