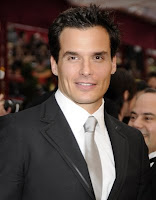 TV Guide Magazine's Will Keck is reporting that Bones producers have turned lemons into lemonade with their upcoming Jersey Shore-inspired episode, following the breakdown in talks with The Situation. Instead, Bones has recruited Antonio Sabato Jr. to play a "guido bouncer at a Jersey Shore club that Brennan (Emily Deschanel) and Booth (David Boreanaz) visit to question someone involved with a murder." (TV Guide Magazine)

Mad Men's Sam Page is heading to the Upper East Side, according to Entertainment Weekly's Michael Ausiello, who reports that Page has been cast in a multiple-episode story arc on the CW's Gossip Girl, where he will play a new love interest for Blake Lively's Serena. He's first expected to turn up in an episode slated to air in October. (Entertainment Weekly's Ausiello Files)

The Chicago Tribune's Maureen Ryan--soon to be AOL's chief television critic--has an interview with Sons of Anarchy's Charlie Hunnam about just where Jax is going this season and how much of his journey will be influenced by reading John Teller's manuscript. "I think it informed the path that I'm trying to take," said Hunnam. "I think that was really always there, though, and it was reassuring me that I wasn't crazy for desiring these things. It pulled into focus exactly what I was [thinking about]. But I also think about the fact that, these were his wishes -- they were unrealized. Jax realizes how idealistic that was. I think I'm trying to figure out what I can actually change and be realistic and be happy with that. Obviously there are giant problems between Jax and Clay but I think all of that stuff, though it rears its head here and there, needs to be put on the back burner until we get Abel back and figure out what we're doing. There's also this big thing hanging over us [the gun charges the Sons face]." (Chicago Tribune's The Watcher)

Entertainment Weekly's Michael Ausiello is reporting that Victor Webster (Melrose Place) has been cast in a recurring role next season on ABC's Castle, where he will provide a new love interest for Stana Katic's Beckett. "There’s an element of mystery to him,” executive producer Andrew Marlowe told Ausiello. “He’s more of a motorcycle guy…A person that is going to intrigue Castle, because he’s going to see a different side of Beckett.” Ausiello also reports that Secret Life of the American Teenager's Ken Baumann will play a love interest for Castle's daughter Alexis, played by Molly Quinn. (Entertainment Weekly's Ausiello Files)

Kate Micucci (Scrubs)--better known as half of musical-comedy act Garfunkel & Oates (a Televisionary fave after seeing them open for The Thrilling Adventure Hour)--has been cast in a recurring role on FOX comedy Raising Hope, where she will play Shelly, the "owner of a baby and doggy day care center," a role that was created for her by executive producer/creator Greg Garcia after her original character was cut from the pilot. (Hollywood Reporter)

Bad news for fans of NBC's Persons Unknown--however many of you are still watching. According to The Futon Critic, NBC is pulling the eleventh episode ("Seven Sacrifices") from the linear broadcast and will make it available online before the series wraps its run with a two-hour finale on Saturday, August 28th. (Futon Critic)

The Hollywood Reporter's Leslie Bruce talks to Nurse Jackie star Edie Falco about her Showtime dark comedy and why she wouldn't rule out reprising her role as Carmela Soprano in a movie version of The Sopranos, should it ever get made. "Frankly, I think it's not going to materialize, but stranger things have happened," said Falco. "I would definitely be interested in being involved; I'm pretty good at rolling with the punches. I would be fine if it never happened, but I would also love to go back there and see all the people I love again. Who knows? I'm not the one making the decisions and I would jump at the chance to participate." (Hollywood Reporter)

TV Guide Magazine's Will Keck reports that Mandy Moore will reprise her role as Mary on the sixth episode of the upcoming season of ABC's Grey's Anatomy. (TV Guide Magazine)

Deadline's Nellie Andreeva is reporting that former Paramount Film Group chief John Lesher has set up two projects at HBO, both based on books. The first is drama Keys to the City, based on Joel Kostman's memoir of his time as a Manhattan locksmith. Adapted by William Monahan, the project will revolve around a "New York locksmith and offers a view of people and sights glimpsed beyond the doors he unlocks." The second project is The Three Weissmans of Westport, to be written by Jenny Lumet (Rachel Getting Married), based on Cathleen Schine's novel, about "a woman's search for meaning after her husband of 48 years walks out on her" and how she "reconnects with her grown daughters who are also dealing with professional and familial irrelevance." (Deadline)

ABC has renewed reality series Wipeout for a fourth season, according to The Hollywood Reporter's James Hibberd, and will get some new obstacles next season. "I'm excited that a fourth season will give our team the opportunity to create bigger and funnier ways to wipe out contestants and thrill families across America," said creator and executive producer Matt Kunitz. (Hollywood Reporter)

ABC Family has ordered a script for drama pilot What Would Jane Do, about a "dateless high school outsider living a double life as a twentysomething career girl in the corporate world." Project hails from executive producer Gavin Polone and writer April Blair. (Hollywood Reporter)