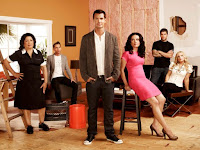 Head over to The Daily Beast, where you can read my latest feature, entitled "Flipping Out's Real-Life Fall-Out," where I talk to Jeff Lewis, Ryan Brown, Jenni Pulos, and Bravo's Andy Cohen about Season Four of Flipping Out, Jeff's now booming design business, and whether television ruined his relationship with Ryan Brown.

Were you on Team Jeff or Team Ryan last year? And does the piece change your perspective at all or strengthen your convictions? Head to the comments section to discuss, debate, and analyze.

Season Four of Flipping Out begins tomorrow night at 9 pm ET/PT on Bravo. You can read my advance review of the fourth season premiere here.