The Daily Beast: "Give Friday Night Lights An Emmy Already" 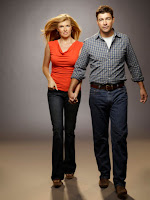 Could Friday Night Lights finally win an Emmy Award? Or, more importantly, isn't about time that the Academy recognized the amazing quality of this fantastic series and its lead actors?

That's the question that I'm asking in a new feature over at The Daily Beast entitled "Give Friday Night Lights An Emmy Already" where I talk to stars--and current Emmy underdogs--Kyle Chandler and Connie Britton.

In the piece, which went live this morning, I talk to Chandler and Britton about their nominations, saying goodbye to one another, the end of Friday Night Lights, and what the fifth and final season of FNL holds for Coach Eric and Tami Taylor.

Head to the comments section to discuss why you think this series has been criminally overlooked by the Television Academy and whether you think Chandler and Britton are more than deserving to take home a statuette or two this weekend at the Primetime Emmy Awards.

Barbara said…
Thanks, Jace, for your Daily Beast article. I always feel cheered, and a little vindicated, when critics site this show for its poignancy, candor and authenticity. Why, indeed, have they never been recognized by the Academy? Probably for many of the reasons that you mention---not much flash, light on the horror and meaningless violence. Forgive me, but I have a dim view of the general public's taste level. Drama that is meaningful, is nuanced and thoughtful continually loses out to the Jersey Shore/Real Housewives mentality that seems to have taken over.
I don't expect Britton and Chandler to win come Sunday, but I am heartened that they have been, at last, recognized for the wonderful,achingly real creation I have enjoyed for the past four years.
8/26/2010