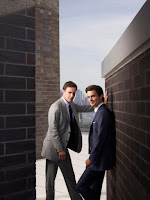 In its second season, USA's stylish caper drama White Collar, which stars Matthew Bomer, Tim DeKay, Marsha Thomason, Willie Garson, and Tiffani Thiessen, has only gotten more charismatic and accomplished, displaying an engaging mix of sophistication, humor, and complexity while introducing a winning selection of guest stars to the mix.

Much of the first season focused on Neal's efforts to track down his errant ex-girlfriend Kate (despite a decided lack of chemistry between the two), but a cliffhanger ending--in which the plane Neal was meant to be boarding with Kate exploded right in front of him, killing her instantly--has not only given Neal a tragic element to overcome but also sets up the sweep of the sophomore season.

While the action on a weekly basis still focuses on the crime of the week, which gives the superb team of Bomer and DeKay numerous opportunities to bounce off of one another, there's an intriguing overarching plot to the season, one that is soaked in revenge and furtive investigation. Bomer's Neal Caffrey is conducting his own private investigation into Kate's death--aided by the improbably noble and eccentric Mozzie (Garson, here finally being given some much deserved spotlighting)--while attempting to conceal his tracks from the suits at the FBI. Unbeknownst to Neal, of course, Peter and Diana (Thomason, crackling with energy and wit) have the amber music box that provided much intrigue last season, with Diana secreting the clue-laden MacGuffin away from all prying eyes.

The divergent plots are bound to come together over the course of the season but, while the music box/OPR/Kate storylines provide a narrative spine for the season, the true joy of White Collar is the dynamic between criminal Neal and detective Peter, an unlikely partnership that has quickly developed into a nuanced friendship between polar opposites. Bomer and DeKay are both so perfectly cast and so comfortable in the skin of these characters that it's impossible to imagine anyone else playing them at this point.

Their banter--fueled by a competitive male rivalry and a mutual admiration bordering on outright respect--gives the series a vintage feel as well as a true emotional core. White Collar isn't so much a procedural drama about the collaring of criminals as it is the unfolding of a professional and personal relationship set against that backdrop. Neal, prone to slight-of-hand and slick vintage suits, seems a man out of time, a charming player with a penchant for wooing women and engaging in some larcenous behavior. Peter, with his loyal wife, love of Yankees games, and modern police methods, has been subtly influenced by Neal over the last season and a half. While neither of them will ever admit it out loud, they need each other for balance.

Season Two has improved on the first season by bringing Thomason's Diana back into the fold and wedging her between Neal and Peter. While there's likely no chance of any romantic intrigue developing between Neal and Diana, their relationship sparkles with palpable tension. Likewise, a new character--introduced in last week's episode--further complicated the web of relationships in the FBI's White Collar Division. I have to say that I was surprised by just how much I loved Hilarie Burton as insurance investigator Sara Ellis: smart, sexy, and savvy, she seems a perfect match for Neal Caffrey, able to stay just one step ahead of him and more than capable of handling a gun.

Here's to hoping that Burton's Sara Ellis continues to pop up over the course of the season (she will, of course) and that the fact that Sara has that flight recorder data that Neal desperately needs means that she'll become enmeshed in that overarching plot, to boot.

In the meantime, however, White Collar has quickly become USA's smartest and most dynamic series to date, a truly charming series that deftly balances whip-smart dialogue, wry humor, and action in a compelling and accessible package. For those of you who haven't been watching for whatever reason, do yourself a favor and jump on board now. You won't be disappointed.

Unknown said…
Yup, truly a great series. It's not deep or thought-provoking, but it's fun, and--in my mind--that's what television should be.

"[T]here's likely no chance of any romantic intrigue" between Neal and Diana? Since she's gay, I'd say no chance at all. :-)

On the other hand, it could be fun to see some sparks between Sara and Neal.

For once, it's nice to see a healthy marriage (Peter and Elizabeth) without jealousy, suspicion, or betrayal. Situations such as the one where she asks Peter what he's doing while she's out of town as he's accessing an escort Web site provide a "clean" humor rather than uncomfortable schadenfreude.

Mozzie's a bit of an incredible character, but he's fun and a necessary device to avoid passport scenes.
8/17/2010

GSanchez said…
Indeed. A very enjoyable show to watch. My only nit is the continued use of green screens for crowd shots. It makes the rest of show, which is shot very well, look cheap.

Aside from that, it's great show with great characters and storylines.
8/17/2010

Sue said…
I've loved this show since S1E1! So happy that you like it, too, and give it such a glowing review. I do have to agree with the green-screen shots, although I think they are usually only when Tiffani is in the scene. I'm guessing she shot all her scenes well before normal shooting began due to her pregnancy.

USA Network has become my favorite cable channel - I always find something I want to watch week after week.
8/17/2010

I agree with everything you said about what makes this show so great. I especially liked the way you dissected and described the Neal/Peter relationship.

The only thing I would add is that I hope by the end of the Sara Ellis story arc, she is no longer one step ahead of Neal. I would like to see them on equal footing by then, causing a mutual (though reluctant) respect between the two.
8/17/2010

Vlada said…
I was surprised by how much I liked Hilarie Burton/Sara, as well. One Tree Hill isn't the best barometer of an actor's ability (except when it comes to Chad Michael Murray, apparently), but when that's all you have to go on... Needless to say, she surpassed my expectations. And like you said, the character is a great match for Neal.
8/17/2010

JanieJones said…
I agree with your analysis of White Collar. I have to admit that I am enjoying S2 much more than S1. As a matter of fact, White Collar has become a bit more interesting than Burn Notice.
No, the show is not very thought-provoking. It has that "breezy" USA network stamp.
I really enjoy the chemistry between DeKay and Bomer. It's outstanding.
I'm very happy that they brought Marsha back, she just adds more.
I also think Garson is riot.
The casting has been fairly good which to me can make all the difference in the world on a television show.
I also agree that I was surprised by Hilarie Burton's Sara. A nice set-up. She did a fine job.
8/18/2010

Summer said…
I completely agree with your positive comments on S2 of White Collar. This show has surpassed all of the other USA shows I watch, and it is head and shoulders above so many shows on my tv at large.

The show would not work out at all if the two leads were wary fans of one another and their relationship cements the show.

I was also pleasantly surprised by Burton, and she has been excellent as Sara. Though Alex was a similar "criminal" as Neal, Sara intrigues him and I would not be surprised to see more brewing there...
8/18/2010