The Daily Beast: "The Enduring Thrills of Dark Shadows" 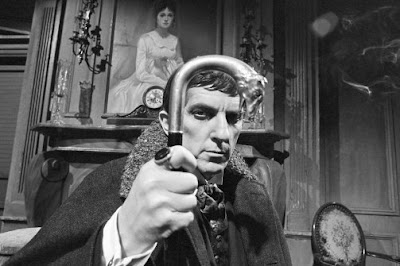 Nearly 50 years ago, Gothic soap Dark Shadows hooked audiences with its spooky storylines and before-its-time remorseful vampire. Ahead of Tim Burton’s movie adaptation, a new DVD version of the show--a limited edition $600 complete series containing all 1220+ episodes packaged in a coffin--comes out Tuesday.

Over at The Daily Beast, you can read "The Enduring Thrills of Dark Shadows," in which I reflect upon the enduring legacy of afternoon soap opera Dark Shadows and its influence upon popular culture today. I grew up watching both the 1991 revival series (which aired during primetime on NBC during the Gulf War) and the original, watching whatever scraps I could get my hands on from VHS tapes at Blockbuster and syndicated runs of the show. It remains a magical experience unlike anything on television to this day.

In Tim Burton’s Dark Shadows, due in theaters Friday, Johnny Depp puts on the fangs of immortal vampire Barnabas Collins, awakened from his centuries-old slumber into a time he cannot comprehend, surrounded by a wealthy and eccentric family he does not know, and thirsting for both blood and his doomed true love, Josette du Pres.

Dark Shadows, of course, is based on Dan Curtis’s groundbreaking cult classic, the 1966–71 ABC daytime soap that became mandatory viewing for many households, including a generation of viewers rushing home from school to catch its latest supernatural plotline. The show spun off feature films (1970’s House of Dark Shadows and 1971’s Night of Dark Shadows), a short-lived 1991 NBC revival series (plus a failed 2004 pilot at the WB), and countless audio plays, books, comics, and merchandise. But Dark Shadows—which will be rereleased Tuesday as a $600 limited-edition complete-series DVD box set, with all 1,225 episodes packaged in a plush coffin—didn’t initially feature the brooding Barnabas (played memorably by the late Jonathan Frid) or indeed contain any hint of the horrors to come.

When Dark Shadows began in June 1966, it was a black-and-white soap revolving around a young orphan, Victoria Winters (Alexandra Moltke), who received an offer of employment from Elizabeth Collins Stoddard (Joan Bennett), the matriarch of a wealthy New England family in far-away Collinsport, Maine. Recalling Shirley Jackson’s We Have Always Lived in the Castle, the Collins clan was deeply eccentric and isolated, their crumbling castle on the hill regarded alternately with suspicion or animosity from the townspeople. Soon a ghost or two emerged into the storylines, a blend of soapy intrigue and romance, and then there was the strange case of Laura Collins (Diana Millay), the estranged wife of scion Roger (Louis Edmonds), who was revealed to be an Egyptian phoenix, risen from the ashes, to reclaim her son David (David Henesy).

But it was the arrival, in April 1967, of Barnabas Collins that pushed Dark Shadows truly into the supernatural camp. Originally intended to appear for just a short run of a few weeks, Frid’s memorable take on Barnabas as a tortured, self-loathing vampire at odds with his hungers and impulses became such a hit with viewers that he remained on the series through the remainder of its run. (Over that time, Frid would play Barnabas in a series of time periods, as vampire and mere human, and other characters as well.)