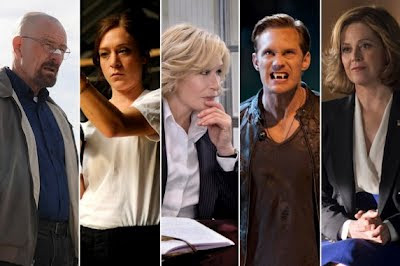 Summer has arrived and you might be tempted to think that, with the departure of spring, anything decent to watch on television has evaporated in the warmth and sunshine. Not so.

Over at The Daily Beast, you can read my latest feature,"Summer 2012 TV Preview: 14 TV Shows Worth Watching This Summer," in which I offer 14 new or noteworthy television shows to hold your interest during the sweltering months ahead.

With the imminent conclusions of the current seasons of AMC’s Mad Men and HBO’s Game of Thrones, it might look as though we’re heading into a television no man’s land this summer.

Not so: while the broadcaster networks are airing their usual fare of reality competitions—So You Think You Can Dance, The Bachelorette, Hell’s Kitchen, and America’s Got Talent are all on the schedule—and second-rate fare (NBC’s Saving Hope, to name one), there is still a ton of original programming to be seen.

AMC’s Breaking Bad returns for the first half of its final season in July (you’ll have to wait until 2013 for the final eight episodes); Showtime brings back the Botwin clan for another season of Weeds and British expat TV writers on Episodes (both return on July 1); TNT serves up new episodes of Falling Skies (June 17) and Rizzoli & Isles (June 5); ABC Family delves deeper into the mysteries of Pretty Little Liars (June 5); and Starz offers more political drama on Boss (August 17). Tabloid fodder Charlie Sheen, meanwhile, returns to television with FX comedy Anger Management, beginning on June 28.

But what shows should you be putting on your TiVo’s Season Pass? Jace Lacob offers 14 new or notable shows, from the expected (True Blood) to the unusual (LinkTV’s Danish political drama Borgen and DirecTV’s Hit and Miss).