The Daily Beast: "Revenge: The 10 Most Memorable Twists in the Wicked First Season" 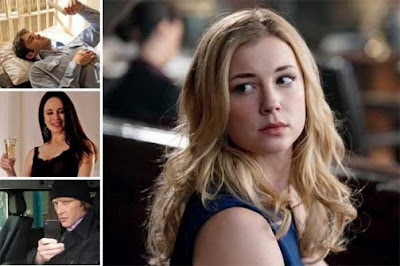 In its first season, ABC’s Revenge offered numerous twists and turns. With the first season ending tonight, I look at the show’s most memorable moments so far.

Over at The Daily Beast, you can read my latest feature, "Revenge: The 10 Most Memorable Twists in the Wicked First Season," in which I offer up the most surprising, exciting, or upsetting moments in the wicked drama to date.

The first season of ABC’s Revenge wraps up tonight, likely leading to a major cliffhanger that will propel the Mike Kelley-created drama into its second year of betrayals, bait-and-switches, and vengeance plots, as Emily Thorne (Emily Van Camp) continues her campaign of destruction against the mercenary and venal Grayson clan.

Revenge itself can be looked at in several ways: a revenge fantasy for the 99 percent against the wealthy ruling class embodied by the morally corrupt Graysons, an ensemble drama set in the heightened reality of green-screen backdrops where the high cost of privilege is explored, or simply a wickedly good soap about one woman attempting to avenge her beloved father’s death and pay back those whose deeds led to her own family’s destruction.

While “Reckoning” will see Emily coming face to face with the man directly responsible for her father’s death, don’t expect all of the various subplots to be tied up neatly. Under the watchful guidance of Kelley and his writing staff, Emily’s quest for vengeance has expanded significantly enough to provide several seasons worth of plot for Revenge’s story engine. Along the way, the plot has swelled to include a number of intriguing, villainous, or plain crazy characters who have either ended up becoming part of Emily’s master plan … or collateral damage along the way.

While it’s impossible to include all of the many twists and turns this season, the list below reflects 10 of the most surprising, exciting, or upsetting moments on the first season of Revenge, from the death of a loved one to kidnapping, murder, and the truth about what happened on the beach.

WARNING: The below contains specific plot details about the entire season of Revenge, so proceed with caution if you’re not up to date.

Mystery Date
It was only recently that Emily learned the truth about her father’s death, something that the audience has suspected since the start of the season: David Clarke (James Tupper) wasn’t killed by an inmate during a prison riot, but murdered by an associate of the Grayson family, a man referred to rather enigmatically as “The White-Haired Man.” This is hardly a surprise, given the grand scale of the show, but it does connect the Graysons even more tightly to David’s destruction.

While the identity of “The White Haired Man” is still unknown, here’s what we do know: he’s the Graysons’ fixer and cleans up their messes. This includes the murder of David Clarke (with whom he was photographed—posing as a prison guard—on the day of his death), the hanging of former Grayson henchman Lee Moran (Derek Ray), and likely multiple other casualties along the way. He may be connected to a terrorist group that was responsible for the downing of passenger plane Flight 197. Conrad Grayson (Henry Czerny) was laundering money for the group. When he was exposed, the Graysons framed their business associate David Clarke for supporting the group financially, using their friends and colleagues to engineer a conspiracy. It didn’t hurt that David was having an affair with Conrad’s wife, Victoria (Madeleine Stowe), who later—unbeknownst to Conrad—became pregnant with his child, Charlotte (Christa B. Allen), who—shock!—is Emily’s sister.