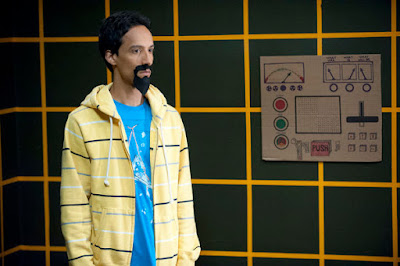 On Thursday evening, NBC burned off the final three episodes of Community’s third season, 90 minutes of the remainder of the season haphazardly arranged around the 30 Rock finale. These well-received episodes tapped into the heart of what makes the offbeat comedy tick: 8-bit video games, an elaborate heist, and a trial over ownership rights to a sandwich shop.

If this all seems gonzo and out there, that’s the point: Community blazed creative trails that were largely heretofore unseen on American broadcast network television. If this had marked the end of Community, it would have gone out with a bang that was both joyous and triumphant. NBC had rescued the show with an eleventh hour reprieve, granting it a 13-episode renewal and moving it to the graveyard of Friday nights. But whether Dan Harmon, whose contract expired at the end of the third season, would be returning to the show he created was still very much unknown when the end credits ran on the final episode.

It was reported late last night, less than 24 hours after the show wrapped up its latest season, that Harmon would be replaced on Community: writers David Guarascio and Moses Port (Aliens in America) would be stepping in as showrunners, and Harmon would shift to a “consulting producer” position on Community.

Harmon confirmed the news this morning with a post on his Tumblr blog, Dan Harmon Poops. “Why’d Sony want me gone? I can’t answer that because I’ve been in as much contact with them as you have,” wrote Harmon. “They literally haven’t called me since the season four pickup, so their reasons for replacing me are clearly none of my business. Community is their property, I only own ten percent of it, and I kind of don’t want to hear what their complaints are because I’m sure it would hurt my feelings even more now that I’d be listening for free.”

Earlier in the week, NBC Entertainment Chairman Robert Greenblatt spoke to press about the ongoing discussions between NBC, studio Sony Pictures Television, and Harmon, saying that Harmon might not be running the day-to-day on the show anymore. "I expect Dan's voice to a part of the show somehow," Greenblatt said.

The news is less of a shock than it is a disappointment, creatively at least. Under Harmon’s aegis, Community has amassed a small but rabidly loyal fanbase and pushed the boundaries of the American sitcom format. But, despite Harmon’s creative accomplishments, he had often run afoul of NBC and Sony during the course of the first three seasons. I was on set during one of these confrontations, in which a combative Harmon screamed at an NBC executive on the phone. (Afterward, he turned to me and said, “And that’s how the sausage gets made.”)

The show hasn’t been without controversy: there has been a revolving door of writers, rumors of budget overages and lateness (former executive producer Neil Goldman denied the former issue, telling me that the "show was not overbudget."), that public feud between Dan Harmon and Chevy Chase. Harmon himself admitted on his blog that he was often “damn bad” at the management aspects of his job. But for the show’s audience (at least that sizeable contingent that doesn’t also work within the industry or cover it), this matters very little in the grand scheme of things.

Showrunners get replaced all the time, Greenblatt said ominously last Sunday. His words echo all the more in my head today, now that I’ve had time to more fully process Harmon’s removal from the show.

There are a few shows that I directly associate with their creators. Community is one of those and Harmon’s vision for the show is impossible to untangle from the show itself. (Another is Gilmore Girls, which went off the rails a bit in Season 6 and then become unwatchable altogether in its final season once Amy Sherman Palladino left. Twin Peaks, the brainchild of David Lynch and Mark Frost, is another.)

Sony’s decision raises certain creative questions: Is Community really Community without Dan Harmon? Can two outsiders come in and fulfill the vision that Harmon had for the show without Harmon? If you rip out the heart of the show, can it still be called Community? As writer Megan Ganz tweeted last night, “Some people think there are a lot of synonyms for the word ‘irreplaceable.’ I don't.”

This is, in many ways, the darkest timeline: a pyrrhic victory for the show and its fans that saw the show renewed, only to see its creator pushed out of his position of creative power, taking away the impetus and drive behind the show’s spirit, and removing any real agency from Harmon, reduced to more a less a “consultant” on a show that he birthed.

Harmon is, at the end of the day, a mad genius, a tortured artist whose natural state of being misunderstood connected the show with millions of viewers who themselves perhaps felt out of place at times. He’ll be missed in many ways.

Back in September 2010, while visiting the set of Community for a story I was writing for The Daily Beast, Dan Harmon jokingly told me, "My job is to dream and smile." Those words are all the more difficult to read today, past tense as they are now.

GeekFurious said…
And as Dan Harmon suggested in his own post, he won't be doing anything on the show in any capacity. What's the point? If there is no power behind his vision, then he's just wasting his time trying to keep the show on its rails.

COMMUNITY died last night. Long live COMMUNITY season 3... as I said in my review of the finale, the best third season in television history!
5/19/2012

catherine boyd said…
Sony Pictures killed my entire "Save the Show" movement. This was the worst thing Sony and NBC could do to a group of very loyal, vocal, long-suffering fans. It's like we don't exist. The sad thing is, we proved many times how mighty and numerous we were.

Community was one of the few TV shows I watch.

Boycotting NBC and Sony Pictures until I am 100 is not enough punishment for this. Ceasing my consumption of mass media products, or watching all British television, seems like the only course to take.