The Daily Beast: "How The Killing Went Wrong" 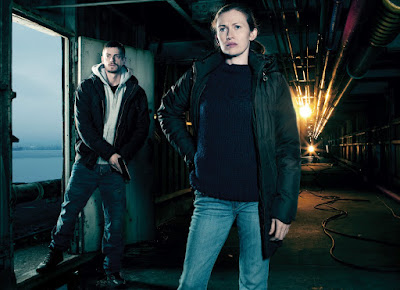 While the uproar over the U.S. version of The Killing has quieted, the show is still a pale imitation of the Danish series on which it is based.

Over at The Daily Beast, you can read my latest feature, "How The Killing Went Wrong," in which I look at how The Killing has handled itself during its second season, and compare it to the stunning and electrifying original Danish series, Forbrydelsen, on which it is based. (I recently watched all 20 episodes of Forbrydelsen over a few evenings.) The original is a mind-blowing and gut-wrenching work of genius.

It’s not necessary to rehash the anger that followed in the wake of the conclusion last June of the first season of AMC’s mystery drama The Killing, based on Søren Sveistrup’s landmark Danish show Forbrydelsen, which follows the murder of a schoolgirl and its impact on the people whose lives the investigation touches upon. What followed were irate reviews, burnished with the “burning intensity of 10,000 white-hot suns” aimed squarely at writer and adapter Veena Sud; an overwhelming audience backlash; and bewilderment at comments that Sud herself made to the press. (A recent New York Times Magazine feature on the show’s challenges, for which reporter Adam Sternbergh flew to Vancouver to spend a Valentine’s Day dinner with Sud, used only two short quotations from her, perhaps demonstrating that she’s learned to choose her words more carefully.)

We’re only too familiar with the groundswell of scorn against the American version of The Killing, which meandered its way into an incomprehensible muddle after a pitch-perfect pilot episode. (The acting, however, was often brilliant, as Michelle Forbes, Mireille Enos, Brent Sexton, and others turned in searing performances.) Unlike the hate-watching that has accompanied, say, NBC’s Smash, there was a full-on revolt against The Killing that resulted in a loss of more than 30 percent of viewers when the show returned for a second season this spring.

Many wondered just how Sud would untangle the Gordian knot created by the controversial first season finale, miring the plot in yet another complication with a reveal that Stephen Holder (Joel Kinnaman), the partner of mentally unstable police detective Sarah Linden (Enos), appeared to be a crooked cop, planting evidence and betraying Linden. It was one twist too many in an already baroque season overflowing with false leads, red herrings, and convoluted conspiracy theories.

Frustrated by both that cliffhanger and the general lugubrious disarray of the second season, I went back to the source material, devouring the icily calculated 20-episode first season of the Danish original in a few days, in an effort to see where things had gone wrong for The Killing. Forbrydelsen (or “The Crime”), after all, was a huge hit both in Denmark in 2007 and last year in the U.K. It spawned a second season unrelated to the mystery of who killed Nanna Birk Larsen (Rosie Larsen in the U.S. version) and is currently preparing a third go-around with detective Sarah Lund (Sofie Gråbøl).