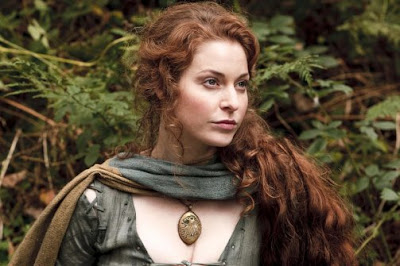 At the heart of the ‘Game of Thrones’ sexposition controversy is Esmé Bianco’s Ros.

At The Daily Beast, you can read my latest feature, "Game of Thrones' Wild Card: Esmé Bianco," in which I sit down with Game of Thrones's Bianco to talk about Ros, a character not in George R.R. Martin's novels, sexposition, nudity, THAT scene, and more.

Fans of HBO’s Game of Thrones who have read the voluminous novels in George R.R. Martin’s A Song of Ice and Fire series upon which the show is based often have an edge over non-readers, given that they’re only too aware of what’s to come.

But, in adapting Game of Thrones from Martin’s work, showrunners David Benioff and D.B. Weiss at times shift away from the texts to explore off-camera sequences, insert new twists and turns, and create new scenarios for the characters to face. In Season 1, Benioff and Weiss went so far to create an original character just for the show: prostitute Ros, who quickly fell into bed with several of the major players and continues to turn up throughout the show’s second season.

A fiery redhead who has clawed her way to a position of relative power within a King’s Landing brothel owned by Aidan Gillen’s Petyr “Littlefinger” Baelish, Ros is played by 29-year-old English actress Esmé Bianco, a former burlesque performer, singer, and Agent Provocateur and Modern Courtesan lingerie model. Originally intended to appear in just the pilot, Bianco—who said her character was created initially as a “plot device”—has continued to add a level of unpredictability to the proceedings. Because she was created for the television show, viewers never know what to expect from Ros … or what her role in the overall story will become.

When we last saw Bianco’s Ros, who returns to Game of Thrones in Sunday’s episode, she was forced to brutally beat a fellow prostitute, Daisy (Maisie Dee), by the sociopathic child-king Joffrey (Jack Gleeson). It was a savage, disturbing scene of escalation and punishment, and served as a reminder that Ros is a pawn in a larger game of power.

“Things don’t become much sunnier for Ros,” Bianco told The Daily Beast, over cocktails at a West Hollywood hideaway. “I was trying to think of one character who is having a good time at the moment … and there’s no one. She’s having as much of a tough time as everyone else.”