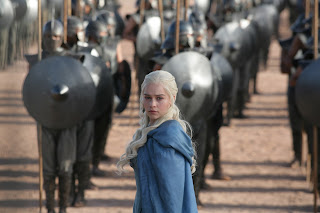 Based on a 1,000-page novel, the third season of HBO’s ‘Game of Thrones’ is the best—and most complex—one we’ve seen yet.

When it launched in 2011, HBO’s fantasy drama Game of Thrones quickly became part of the global collective consciousness, an often brutally violent and staggeringly beautiful series that offered viewers an immersive television experience.

Based on the gargantuan bestselling novel series A Song of Ice and Fire by George R.R. Martin, Game of Thrones depicts the bloody and vicious battle for control of the Iron Throne in the Seven Kingdoms of Westeros, a fictional world that bears a resemblance to medieval Europe ... if Europe had once been the home of magic, dragons, and a long-slumbering ancient evil. However, unlike most fantasy stories, Game of Thrones presents a complex morality that is far more nuanced than simply the forces of good vs. evil. Here, good men are killed while the wicked are rewarded; innocence suffers in the face of depravity; and everyone has a personal agenda to advance, a knife hidden behind the most beatific of smiles.

Season 3 of Game of Thrones kicks off on HBO on March 31 with 10 episodes that are based on Martin’s perhaps most beloved novel, A Storm of Swords, a hefty 1,000-page tome that is by far the most complicated and intricate of the five books in the series to date. It is a sweeping saga that flits between dozens of narrators and across continents—from the sultry heat of Slaver’s Bay to the raw iciness beyond the Wall—as alliances are formed and broken, lives taken, and conspiracies hatched.

ranslating such a monumental work of fiction to the screen is no easy feat, and executive producers David Benioff and D.B. Weiss have done an incredible job thus far in balancing the needs of diehard fans, the demands of the story, and a sense of accessibility to those viewers who don’t detect the nuances between the Dothraki and High Valyrian tongues. Adaptation, particularly of an ongoing series, is a fluid, mercurial thing, and the show’s executive producers have proven largely capable of shifting content, paring it down, and inventing new material in order to make the narrative fit within the confines of a weekly television series.

Season 3, which will depict roughly the first half of Martin’s A Storm of Swords, will present Benioff and Weiss with their greatest challenge yet, as both sides attempt to pick up the pieces after the last season’s climactic Battle of the Blackwater. The first four episodes of the new season, provided to critics ahead of its premiere, demonstrate a canny ability to fuse the literary with the visual, resulting in an exhilarating and magnificent thing of beauty, particularly in those scenes that make full use of locations as diverse as Iceland, Croatia, and Morocco.