The Daily Beast: "At the Bottom of The Staircase" 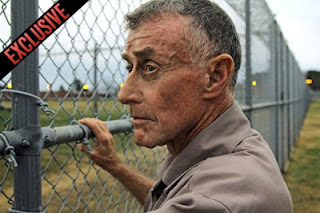 The story of crime novelist Michael Peterson, convicted of murdering his wife Kathleen in 2001, takes yet another strange turn as he gets his shot at an appeal and a possible overturn of his guilty verdict, captured in the two-part sequel to the riveting documentary The Staircase. Director Jean-Xavier de Lestrade offers his take on Peterson’s story and the possibility of justice finally being served.

Over at The Daily Beast, you can read a feature that I had a hand in bringing to life, "At the Bottom of The Staircase," in which Jean-Xavier de Lestrade, the director of Sundance's addictive documentary series The Staircase, writes about Michael Peterson, the owl theory, justice, and more.

Jean-Xavier de Lestrade is an Academy Award–winning documentary filmmaker and the director of the riveting 2004 documentary The Staircase (a.k.a. Soupçons), currently airing on Sundance Channel. The eight-hour cinema verité series recounts the serpentine trial of crime novelist Michael Peterson, accused of murdering his wife Kathleen, whose body was discovered at the bottom of a narrow staircase in their Durham, North Carolina, home in 2001. The Staircase returns with two new episodes, entitled “The Staircase: Last Chance,” beginning March 4 on Sundance Channel, and follows Peterson’s latest appeal attempt. What follows is a first-person piece written by de Lestrade for The Daily Beast.

When I finally completed The Staircase in September 2004, I felt as emotionally drained as David Rudolf did at the end of the film. I told myself that I would stop making documentary films—just as David had vowed that the Peterson trial would be his last criminal-defense case. It was wrenching to watch as Michael Peterson, bound at the wrists, was swept into the car that would take him to prison for the rest of his life. I couldn’t bear Martha and Margaret’s endless tears. It was harrowing to try to comfort a family shattered by a tragedy that seemed so senseless.

Since 2004 I have directed three fictional films, each as thematically and formally distinct as the next. Regardless, I never forgot the characters from The Staircase. The sheer force of their reality kept that family's memory at the fore of my mind. I visited Michael Peterson four times in prison, and the mystery of Kathleen Peterson's death haunts me to this day.

I knew that this was the only story that could lure me back into documentary filmmaking. It had to wait eight years. Eight years Michael Peterson spent in a cell that he shared with 27 other prisoners. Eight years of rejected appeals and crushed hopes. Eight years I waited for fate to bring a new twist to this extraordinary saga.

Maybe this most recent turn of events will give the story an epilogue—and me some peace of mind.