The Daily Beast: "Girls Gets Graphic" 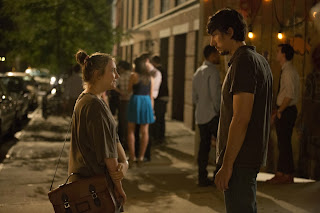 This week’s episode of Girls graphically depicted the results of a male character’s climax. Why the scene has outraged some, and why it’s a watershed moment for the HBO comedy.

Over at The Daily Beast, you can read my latest feature, "Girls Gets Graphic," in which I write about Girls, viewer responses, graphic content, and why THAT scene from this week's episode was a watershed moment for the Lena Dunham comedy.

HBO’s Girls has always been a lightning rod for critical reaction, whether it be allegations of nepotism, privilege, or racism. It’s impossible to imagine a week going by without someone, somewhere, having an adverse reaction to the Lena Dunham-created comedy.

And that’s okay: art is meant to trigger emotional responses. I’d far rather watch a television show that stirred up feelings within its viewers—that challenged them to watch something complicated and often uncomfortable—than a show whose main goal was simply to please the most people, across all demographic swaths, week after week.

Girls is the most definitely the former rather than the latter. It’s a show that revels in its own complexity, in the often-unlikable natures of its characters, in the comedy of the awkward that follows. This week’s episode (“On All Fours”)—written by Lena Dunham and Jenni Konner and directed by Dunham—expectedly led to all sorts of responses from its viewers, many of which was of the outraged variety.

Joe Flint at the Los Angeles Times yesterday penned a reaction to this week’s episode of Girls, focusing in particular on the graphic sex scene between Adam (Adam Driver) and his new girlfriend, Natalia (Shiri Appleby), which was challenging to watch: after making her crawl to his bedroom on all fours, he proceeded to engage in some disconnected, rough sex with her and then finished himself off on her chest.

“But Sunday's episode was graphic even for those fans used to seeing creator and star Lena Dunham's no-holds-barred approach to story-telling,” wrote Flint. “This was not a first for cable TV, or the movies. An episode of HBO's Sex and the City showed fluid but played it for laughs, as did a well-known scene featuring Cameron Diaz in the comedy There's Something About Mary.”

“However, this time it was a jarring end to a violent and hard-to-watch scene,” he continued. “Even theatrical movies with sexually explicit material and adult pay-per-view channels typically steer clear of such displays, especially if it's not for comic relief."

Flint is right in saying that this was not “a first” for cable television. But he (and an HBO spokeswoman quoted in the story) seem to have a short memory, as HBO’s short-lived drama Tell Me You Love Me featured an even more graphic scene involving “fluids” that was most definitely not played for comic relief.