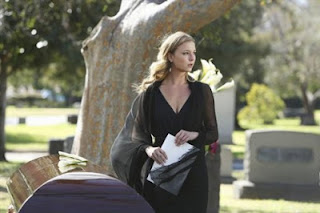 Last year, Revenge was a thrill-a-minute vengeance fantasy but now, in its second season, it’s a convoluted mess. My take on the show’s head-scratching fall from grace.

Over at The Daily Beast, you can read my latest feature, "Revenge: What Went Wrong with ABC’s Once-Daring Thriller?" In it, I ponder just what went wrong with ABC's Revenge that caused its shocking second-season drop in quality.

What a difference a year makes, particularly in the life of a serialized television narrative.

At this time last year, ABC’s Revenge—Mike Kelley’s modern-day retelling of Alexandre Dumas’s The Count of Monte Cristo, set among the Hamptons polo set—was a dazzling vengeance fantasy, reveling in its dark nature and the even darker journey of Emily Thorne (Emily VanCamp), a woman scorned who was out for payback against the wealthy clan who destroyed her life and shattered her family.

It functioned on several levels and tapped into the zeitgeist of 2012; it could be seen (as I had written) as “not only winking noir … [but also as] a retribution fantasy for the 99 percent,” as Emily looked to take down the conspirators who ruined her life and set up her father (James Tupper) as a fall guy for a terrorist-funded financial scheme that resulted in the downing of a passenger plane. Her vast fortune—acquired from a tech mogul, Nolan Ross (Gabriel Mann), whom her father had helped when he was starting out—was used in service of her holy mission of vengeance.

And each week, Revenge found Emily immolating her sense of morality as she concocted yet another grandiose revenge scheme, caring little about the collateral damage she was causing around her. She was entrancing, as I wrote last year: “Emily—criminal mastermind, computer hacker, cat burglar, and willing arsonist, not to mention a ronin in Giuseppe Zanotti stilettos—recalls Stieg Larsson’s Lisbeth Salander as much as she does Dumas’s Edmond Dantès.”

Where did that character disappear to? Season 2 of Revenge has seemed, in comparison to its deftly (and magnificently) plotted first season, a convoluted mess. Rather than further the central conceit—Emily’s quest for revenge against the Grayson clan, headed by femme fatale Victoria (Madeleine Stowe) and robber baron Conrad (Henry Czerny)—the show has meandered into all manner of narrative trouble: plots about a broader conspiracy, psychotic mothers, vengeance buddies (see: Barry Sloane’s Aiden), computer programs, kidnapped sisters, waterfront shakedowns, lazy double-crossings, and a ruthless terrorist organization called The Initiative, whose operative (Wendy Crewson) appears to do little besides be chauffeured around New York all day long.

In the first season, Stowe’s Victoria provided a menacing nemesis for Emily, but her role has been usurped by The Initiative, which is more evil and ruthless than even Victoria. But that’s a problem: by making Victoria the puppet of people even worse than her, it’s taken away much of her power. Additionally, Crewson’s Helen Crowley proved to be not half as interesting, complex, or scary as Victoria Grayson. The balance of power didn’t just shift in Season 2, it fell right off the scales.