The Daily Beast: "Joelle Carter's Ava Crowder: The Most Badass Woman on TV" 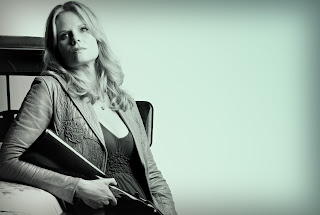 She’s wielded a skillet, a rifle, and—in last night’s episode of Justified—nearly ignited a man. Joelle Carter talks to me about the evolution of Ava Crowder, empowerment, and last night's explosive episode of the FX drama.

One choice quote: “We wanted to see them on top of a mountain before the fall,” said Carter.

Over at The Daily Beast, you can read my latest feature, "The Most Badass Woman on TV," in which I sit down with Joelle Carter to talk about playing Ava Crowder, empowerment, and more.

FX’s Justified, based on characters created by novelist Elmore Leonard, revolves around criminals and lawmen who collide in a never-ending bloody battle. Unfolding largely in the backwoods of modern-day Harlan County, Kentucky, the show is grounded in a rough-and-tumble man’s world, one containing a very specific code of honor among the hairy-chested set. It’s a show about how we often stumble upon the path of darkness, how violence defines our worldview, how a gun can represent the law or criminality.

But it’s also a show that features one of the strongest women on television in Ava Crowder, one-time battered wife-turned outlaw who has emerged as a force to be reckoned with over the course of the last four seasons. As magnificently played by Joelle Carter in a tightrope performance, she’s a character who engages the viewer’s sympathies while indulging in all sorts of bad behavior: whacking uppity men with skillets, slaying vicious pimps, punching whores, and in Tuesday’s episode of Justified (“Decoy”), nearly setting a man on fire with little more than a cigarette lighter and a snifter of high-proof booze.

Ava’s behavior here is, well, absolutely justified. Her very much NSFW scene is fueled by a desire, both on the part of Ava and the audience, to see Mike O’Malley’s Nicky Augustine pay for treating the Harlan businesswoman as nothing more than a common whore. As Ava uses her sexuality—just one of the many weapons in her deadly arsenal—to get closer to Nicky, the audience cheers her on, wanting Nicky go up in flames, to be punished for his awful misogyny, and for reducing Ava to a simple girl who turns tricks.

Carter, 40, said that the scene is intended to be a “slow burn,” a taut sequence where Ava waits to discover if Boyd (Walton Goggins) has been killed, only to turn her attentions on the man jeopardizing her lover. “Ava reacts before she thinks, sometimes,” she said, laughing.

In person, Carter barely resembles Ava Crowder. Perched on a chair in a corner of a Beverly Hills bar on an unseasonably dreary Los Angeles day, her blonde hair is cut short and her eyebrows dyed for a futuristic short film that she’s producing and starring in. Gone is Ava’s Kentucky drawl, replaced with a rounded accent that could be from Anywhere, U.S.A. (“It’s always in my repertoire,” she said. “When I get drunk or lazy or something, you’ll hear the twang.”)