The Daily Beast: "Five Facts About the New Doctor Who Companion, Jenna-Louise Coleman" 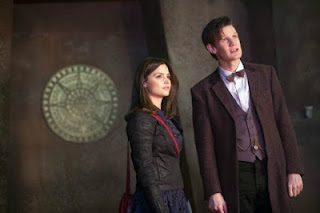 Her two previous Doctor Who characters all look alike... and they've all died. Jace Lacob rounds up five facts about new Doctor Who companion Jenna-Louise Coleman.

The Doctor—the centuries old time-traveler whose 11th incarnation is played by Matt Smith—has had his fair share of companions over the last 50 years, but the Time Lord is about to get yet another in the form of 26-year-old British actress Jenna-Louise Coleman, who steps into the TARDIS officially when Doctor Who's seventh season returns for its back half on March 30.

Coleman has turned up on Doctor Who twice already in the past year, playing very different characters with the same appearance and a similar name. There she is in "Asylum of the Daleks" as Oswin Oswald, the starship Alaska's junior entertainment manager whose soul is trapped in the body of a souffle-loving killing machine. There she is again as Clara Oswin Oswald in 2012's Christmas Special, "The Snowmen," playing a 19th century governess who gets caught up in one of the Doctor's plots. (It involves killer snow, memories, Richard E. Grant, and the disembodied voice of Sir Ian McKellen. Don't ask.)

Coleman's characters have a tendency to die, but the last sighting of Coleman—wandering around the graveyard where her 19th century doppelganger is bured in the 21st century—points towards an undeniable truth: they are all, somehow, the same woman, echoing across time and space.

Coleman is no stranger to television, even if American audiences aren't that familiar with the actress, who has appeared in ITV/ABC's Titanic miniseries (written by Downton Abbey creator Julian Fellowes), Captain America: The First Avenger, and Stephen Poliakoff's Jazz Age period drama Dancing on the Edge. But for those who want to know more about the actress who is taking over as the Doctor's official companion, a role last played Karen Gillan and Arthur Darvill's Amy and Rory, below are five facts about Jenna-Louise Coleman.

1. One of her first television roles was on the long-running British soap Emmerdale, where she played Jasmine, one half of the show's "groundbreakingly ‘normal’ lesbian couple," alternately a troubled student, barmaid, and journalist. And a murderer, as it turns out. The character was written off the show when Jasmine was sent to prison for manslaughter after she bludgeoned her would-be rapist to death with a chair leg and then dumped the body in a lake. "As a first job I'm grateful for it," she told The Guardian earlier this year. "Though by the end I was quite restless. It was a brilliant experience. But I was ready to leave when I did."