The Daily Beast: "Game of Thrones Season 3 for Dummies" 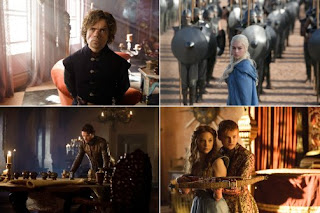 HBO's fantasy series Game of Thrones returns Sunday for a third season. Can’t remember the difference between a wight and a white walker? Jace Lacob's glossary explains all! (Plus, read our advance review of Season 3.)

At The Daily Beast, you can read my latest feature, "Game of Thrones Season 3 for Dummies," the third in an ongoing series that each year brings you up to speed (and reminds you of what you may have forgotten) about the people, places, and recurring motifs from the immersive HBO drama (and George R. R. Martin's massive A Song of Ice and Fire novel series), which returns Sunday, March 31.

In its riveting second season, Game of Thrones—based on George R.R. Martin’s behemoth A Song of Ice and Fire series and adapted by executive producers David Benioff and D.B. Weiss—brought the war for the Iron Throne to a staggering climax with the amazing Battle of the Blackwater, a hugely dramatic set piece that found the naval forces of Stannis Baratheon (Stephen Dillane) attacking King’s Landing, only to be cast back into the sea, thanks to some ingenuity from Tyrion Lannister (Peter Dinklage).

The highly anticipated third season of HBO’s Game of Thrones begins on Sunday at 9 p.m., kicking off another season of treachery, romance, conspiracies, dragons and, um, snowy blue-eyed zombie creatures. If you haven’t read Martin’s hefty novels, the world that the show inhabits can be an intimidating place without the maps, family trees and lineages contained within the novels’ vast appendices. And Season 3 of Game of Thrones is no exception, introducing a slew of new characters, settings and plots, each requiring a whole new knowledge base.

As we did for Season 1 and Season 2, The Daily Beast delves deep into the first four episodes of Game of Thrones Season 3, Martin’s third novel (A Storm of Swords) and beyond to bring you up to speed on everything you need to know, from Astapor to Winterfell. Consider it both a refresher on events from the second season and a constant source of information and background to come back to as you watch the third season.

WARNING: A note on spoilers: I discuss many plot details from Season 2 below. But I do not spoil specifics from Season 3, unless you count knowing settings and themes and characters as spoilers. In which case, spoiler alerts!

Astapor: A city set upon Slaver’s Bay, and a nexus for a thriving slave trade and a huge economic gap between the masters and their servants. It is home to the training grounds for a rare breed of slave-warriors. (See: Unsullied, The.)

Blackfish, The: The nickname of Ser Brynden Tully (Clive Russell), the uncle of Lady Catelyn Stark (Michelle Fairley) and Lady Lysa Arryn (Kate Dickie). A Tully by birth, he has taken a black fish as his personal sigil, an inside joke that plays upon the Tully’s fish sigil.

Brotherhood Without Banners, The: A motley group of rebels and outlaws who were once part of a team sent by Eddard Stark (Sean Bean) to capture Gregor Clegane (Ian Whyte), a.k.a. The Mountain. But after the deaths of Ned and Robert Baratheon (Mark Addy), they found themselves adrift without someone to whom they could pledge their loyalty. (Hence, no banners.) Now, they claim allegiance to no individual faction in the War of Five Kings, instead keeping the peace by their own vigilante methods. (Can also refer to real-life fans of George R.R. Martin’s A Song of Ice and Fire novel series.)