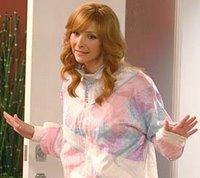 Ran into Lisa Kudrow here in Aspen (she's here to present the USCAF Career Tribute Award to television legend James Burrows, see below) and I couldn't resist questioning her about a possible comeback for, er, The Comeback, her brilliant-yet-cancelled HBO mockumentary (shame on you for not watching it!). Unfortunately, it seems that the chances of resurrection for The Comeback are as slim as Valerie Cherish getting a personal invitation to Paulie G's party (again, shame on you if you don't get the reference). Kudrow and her production company, Is or Isn't, did investigate the possibility of direct-to-DVD release for the show but, without securing HBO's consent to release ownership of the show, it wasn't really feasible. However, she did tell me that the show will be released later this year and that they are planning to shoot additional original material for the disc. Which Valerie Cherish might tell you, you do need to see that.

If you couldn't tell from the headline, James Burrows is a television god. A veritable legend, Burrows has directed and produced nearly every major television half-hour comedy you can name over the last two decades... save Seinfeld. He's worked on the Mary Tyler Moore Show, Taxi, Cheers, Friends, Will & Grace, Caroline in the City, Frasier, and many, many more. The man gets offered 12 pilots a season and can pick and choose his projects carefully, usually only selecting to direct two pilots a year. He has an unerring sense of what shows are going to strike it big and a unique style in which he allows the writers to improvise and play... but also protects the writers' vision.

I was lucky enough to be on hand Saturday when Lisa Kudrow and HBO's Chris Albrect delivered the US Comedy Arts Festival Career Tribute award to Burrows (think of it as the equivalent of the Oscars' Lifetime Achievement Award). Kudrow and Burrows are old friends: he directed the pilot and many, many episodes of Friends and had a hand in casting her as Phoebe; he even guest starred as himself several times on Kudrow's aforementioned HBO comedy, The Comeback, at her insistence (she even named the character Jimmy so he would be obligated).

While I can't replicate everything that was discussed in that fascinating hour discussion between them, I will share one interesting gem that came up. While Burrows and Kudrow are close, Burrows once fired Kudrow from a pilot... the pilot of Frasier, in fact. Kudrow was brought to NBC to read for the part of Roz, as was Peri Gilpin. Kudrow gave an incredible performance and the network loved her. But at the end of the pilot episode, Roz needed to deliver a speech to Frasier in which she tells him that he has to accept his father. Kudrow's performance, according to Burrows, was brilliant but off-center. And whoever delivered this extremely important and emotional speech needed to be completely centered. Burrows took Kudrow aside and told her that he was going to have to let her go and instead hired Gilpin. The rest is sitcom history.

Of course, Kudrow didn't do so bad herself. When Burrows was hired to direct the pilot of Friends, he cast Kudrow as the deliciously off-center Phoebe. Not too shabby.

"House" Party But No Invite for "Joey" 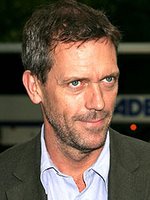 Speaking of former Friends, everyone who watches television gave a sigh of relief as NBC announced that they were pulling Joey off the air after briefly resurrecting the show this month. Is the show cancelled for good? Or will NBC burn off the final episodes over the summer? Only time can tell, though I am pulling for the former.

In other series news, FOX renewed its hit medical mysteries series, House. While I don't watch House (I've only ever seen the pilot and a few minutes here and there), I absolutely adore actor Hugh Laurie. If you've never see his brilliant comedy series Black Adder or the superlative Jeeves & Wooster (or for that matter, A Bit of Fry and Laurie), what are you waiting for?

The machine, which runs on an Intel processor, will function as a handheld organizer, an MP3 player, a mobile television receiver, a games device, and a notebook PC. The devices will connect wirelessly to the Internet and will contain full-sized hard drives. Samsung's product is expected to go on sale in April.

What interests me most, however, is the mobile television receiver. Is this the first step towards portable digital television? And more importantly: will we be able to transfer recordings from TiVo onto the device?

I am still in Aspen having an absolute blast, but here's what I'll be TiVo'ing tonight to watch when I get back into town:

Can Julia Louis-Dreyfus escape the dreaded Seinfeld curse? I'll be checking out the pilot to see. I really want to like it as I love Julia, but her last show (Watching Ellie) was unwatchable... though her appearances as not-really-blind lawyer Maggie Lizer on Arrested Development redeemed her in my eyes.

Just because. Though I am tempted to skip this week's episode (what's the point in watching Apprentice on TiVo?) and record the second episode of The New Adventures of Old Christine. Decisions, decisions.