Ah, midseason. It's that time of year again. When American Idol returns to take over the airwaves, when networks hastily rearrange their schedules, shunting off the tried-and-true to give a new batch of hopefuls the opportunity to shine. That time when the television-viewing audience either discovers a few new gems... or is forced to suffer through some stinkers that for some reason failed to make it on the network schedules back in the fall (Four Kings, cough, cough).

This week, CBS and ABC unveiled their latest entries in the midseason race: The Unit and Sons & Daughters. So far, CBS' midseason track record hasn't been so good (think Love Monkey) but they are hoping to change that by launching a new military action drama from David Mamet and Shawn Ryan while ABC attempts to undo their disastrous recent comedy offerings (Emily's Reasons Why Not and Jake Interrupted, among others) with an improvisational comedy about the twisted branches of an extended family tree.

Created by playwright and director David Mamet and Shawn Ryan (The Shield), The Unit is a different sort of action drama than we've seen before on television. Following a team of covert operatives, the show follows these men as they risk their lives on dangerous international missions, while also tracking their wives, who, back in the US, oversee the home front and conceal their husbands' secrets.

24's Dennis Haysbert is team leader Jonas Blane, a stern tactician whom we first see on a mission to take out an arms dealer in Afghanistan. Returning to the US, Blane's team of misfits receives a new recruit: newby Bob Brown, played with quiet assurance by Scott Foley. Their commander, the tough-as-nails and morally ambiguous Colonel Tom Ryan (Robert Patrick) quickly sends them on their first assignment: a training mission in Idaho, which goes awry when Middle Eastern terrorists take over a charter jet with 150 people aboard and plan to blow up the plane. Meanwhile, back at home, as Kim (Audrey Marie Anderson), Bob's wary wife, tries to settle into her new but confusing life on the military base, Jonas' wife, Molly (Regina Taylor) gives her a lesson on the veil of secrecy that surrounds them all. "You do not tell your mother, your best friend, your priest, what your husband does."

As Bob and Jonas prepare to take down the terroritsts, the women on the homefront have their own issues to deal with. Military wife Tiffy (Abby Brammell), whose husband she has only seen three times in the last four months, is sleeping with commanding officer Tom Ryan... Meanwhile, Kim discovers that she is pregnant with her second child (after suffering a miscarriage last year) and battles with Molly to take control of her new life. Kim refuses to move onto the military base, but Molly has already made plans that include keeping a watchful eye on her from across the street.

The climactic shootout aboard the plane at the episode's end is as stressful as anything on 24 and as beautifully shot as Jennifer Garner's action sequences on Alias (the pilot was directed by feature director Davis Guggenheim). And the steely resolve with which The Unit's wives operate in their personal lives makes them as tough and unyeilding as their men in the field. Regina Taylor in particular gives a performance that is at once gracious as it is deadly; you do not want to mess with these women... which Bob's wife Kim finds out in the first episode. And in the espionage business, with your husbands out on missions and possibly never to return, these are the women you want covering your back.

That Mamet seeks to include the military wives' experiences within the larger framework of espionage serves to further explore the price that agents (and their families) have to pay, in a way that is both realistic as it is heart-pounding. The Unit isn't about wigs and disguises (as Alias is) or shocking, plot-twist laden thrills like 24. What it is is an intelligent, compelling action-drama that shows us who is protecting us and whom they are making sacrifices to protect.

While I'm not sure I like the show's pre-Amazing Race timeslot (though it makes sense to make use of CBS' similarly themed NCIS as a military-drama lead-in), the show's winning combination of adrenaline, action, bracing dialogue, and dynamic interpersonal relationships make The Unit appointment television. And when you're on before a show that relies so heavily on luck and timing as Amazing Race, that's a good thing. 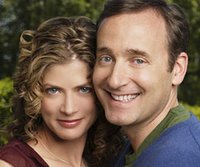 A semi-improvised comedy, Sons & Daughters has a similar feel to Curb Your Enthusiasm and Arrested Development, but without the former's squirm-inducing lead or the latter's full-blown zaniness. Like Curb, the dialogue is improvised by the talented actors, but like Arrested, the series is serialized in its format, storylines spilling over from one episode into another and building as the series goes on. Whether the show can manage to find an audience for another single-camera comedy in the post-Arrested landscape will be a matter of opinion.

Created by Nick Holly and Fred Goss (Bravo's Significant Others), who also stars, Sons & Daughters circles around an extended (and sprawling) family: two grandparents, their children and their respective spouses, and their grandkids... all of whom find themselves incapable of keeping even the most mundane matters secret.

The ringleader of this crazy three-ring circus is Cameron Walker (Fred Goss), standing in here for suburban Everyman. Cameron seems to have the perfect marriage with his adorable wife Liz (Gillian Vigman), with whom Cameron has two children, plus a disturbed teenage son from his first marriage. Cameron's sister Sharon (Alison Quinn)'s marriage is far from perfect but she and her husband Don (Jerry Lambert) refuse to admit any difficulties. Cameron also has a half-sister Jenna (Amanda Walsh), an unmarried mother only attracted to sleazy guys, who is the daughter of his mom Colleen (Dee Wallace) and stepdad Wendal (Max Gail).

In the pilot episode ("Anniversary Party"), Cameron plans to throw Colleen and Wendal a party celebrating their 25th wedding anniversary. However, those plans hit a speedbump when Wendal admits to Cameron that he's been thinking of divorcing Colleen. Cameron, unable to keep it a secret, quickly spreads the news to his sister, but by the time the party rolls around everyone there--except Colleen--knows about Wendal's thoughts. These revelations continue into the second episode of the evening ("Bowling Night"), where Colleen learns that Wendal was planning on leaving her and that everyone in her family knew, an admission that comes out during a traditonal family bowling night, itself an attempt on Cameron's part to pretend that everything is okay. Meanwhile, Cameron's sister Sharon and her husband Don, a closet harmonica player, attempt to fix their sexless marriage, with disastrous results. (A rather amusing subplot has Cameron's bigoted Great-Aunt Rae get her comeuppance--after telling his five-year-old daughter that she is going to hell because she's a Jew--when Cameron's troubled son Henry draws a mustache on her while she sleeps, making her look like Hitler.)

Sons & Daughters is witty and often amusing (even if it doesn't generate the laugh-out-loud moments of Arrested Development) and manages to capture the controlled chaos of extended family life. The actors--especially the younger members of the troupe--are impressive, and the delivery of their lines feels very genuine and off-the-cuff. Goss in particular is a likeable and genial lead and serves as an anchor to the show; with so many characters, it would be easy in lesser hands for the audience to lose the thread. The improvisionational nature of the show is hit-or-miss. Some of the lines are unexpected gems while others fall flat. And I'm not sure if they will be able to keep the energy seen in the pilot episode going for any extended period of time.

While Commander in Chief takes a rest at Camp David, ABC will be double-pumping episodes of Sons & Daughters each Tuesday night at 9 pm, in the same timeslot as The Unit. May the best "family" win.

I'm in snowy and festive Aspen, but I'll definitely be recording the season finale of Beauty & the Geek for my viewing pleasure upon my return to sunny Los Angeles.

If you're wondering why my usual picks of Everybody Hates Chris, My Name is Earl, and The Office are missing, they are fortunately (or unfortunately, if you choose to look at it that way) all repeats tonight.