While There's Nothing New About "Old Christine," I Like Her 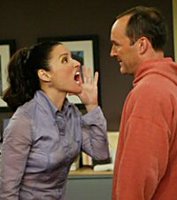 I can't believe I am saying this, but I have a little bit of a crush on Old Christine. Okay, first of all I refuse to call the show by its complete title. The New Adventures of Old Christine? Way too much of a mouthful. I'll call the new Julia Louis-Dreyfus vehicle by what I am sure will become its abbreviated moniker, Old Christine. Is the show anything entirely new or fresh? Certainly not. But there is something comforting and rewarding about seeing Louis-Dreyfus take on a new role in a show that is comedically far ahead of fellow new coms Free Ride, Courting Alex, or The Loop. Even if there is still a laugh-track.

The premise is simple: the Christine of the title is a divorced mother of an adorable eight-year-old boy Ritchie (Trevor Gagnon) who has managed to remain friends with her charming ex-husband Richard (Clark Gregg), who two years after their divorce still drops by and acts like her best friend. She lives with her slacker younger brother Matthew (Hamish Linklater), owns a chain of upscale women-only gyms, and is generally content with the way things are. That is, until Christine drops her son off at his new fancy private school and learns that her ex-hubby has been seeing someone. Someone also named Christine, like her, but many, many years younger and a lot more ditsy (Emily Rutherfurd). So Old Christine has to deal with New/Young Christine, the blonde preppy mothers at her son's school, and begin to navigate the complex dating world of Los Angeles, all while pretending that she's okay with the new arrangement.

Louis-Dreyfus is instantly likeable as Christine and grounds the show; she's a more centered version of her character Elaine from (dare I say it?) Seinfeld. She is one of the few actresses today who can manage to be beautiful and self-deprecating at the same time; she's never afraid to play the sap and is never above performing physical comedy. (What other actress, while talking about how she'd rather wait for the "magic" of meeting someone rather than being set up on a blind date, would be stuffing her face with bagels while she uttered the line?)

Her relationship with her (straight) younger brother (played with understated cool by American Dreams' Linklater) is for once a varation on the twee and overused stereotype of the gay best friend. As a slacker and bachelor, his life is even more of a mess than Christine's, but somehow having someone just living there is a comfort to her. And their dialogue at the supermarket (in the second episode, "Supertramp"), where he instructs her on how to pick up a one-night stand, is priceless. But I do think there's something missing in the form of a female confidante for Christine (I don't count the towel girl at one of her gym branches) and having the always hilarious Wanda Sykes guest star as Christine's friend Barb in last night's episode ("Open Water") made me realize it all the more. I can only hope that the producers either bring back Sykes or have her recur on a regular basis. Surrounded by men, Christine needs some sort of female support system.

I believe it's possible to judge a show on the strength of its guest stars and if that's true, then Old Christine has already come out on top. Aside from last night's Wanda Sykes appearance, the week before featured Andy Richter as a lovelorn divorcé whom Christine sleeps with as a one night stand... only to discover that he has a child at her son's prep school and, boy, is he clingy. So clingy that the moms refer to him as "The Sad Dad."

Will Christine ever find love? In last night's episode ("Open Water"), she came pretty close. After Barb (Sykes) sets her up on a disatrous blind date with a man who brings his own food to the restaurant (he pulls out a piece of chicken from inside his jacket pocket), Christine falls for a guy whom she originally thought was her blind date and whom she keeps seeing on his own series of blind-dates-from-hell.

If there's one glaring flaw with the show it's the omnipresent laugh-track, but that's more a problem I have with the genre than Old Christine specifically. I just wish that the show would allow the audience to find the joke on their own without the guidance of canned laughter. It makes me not want to laugh, despite myself.

Will Old Christine escape the dreaded Seinfeld curse? It's too soon to tell. But ultimately, I can't say no to Julia Louis-Dreyfus' charms. I want Christine to find love, but then I know that the show will have to end. And with the quick wit charms of Christine, old or no, I hope we can grow old together for a bit.

Gilmore Girls is a repeat, AGAIN. And looks to be so for the foreseeable future. I feel lost without an 8:00 show on Tuesday nights. But at least the two repeat episodes of GG that the WB is airing tonight are written respectively by Daniel Palladino and Amy Sherman Palladino. And if you haven't seen those episodes yet, check 'em out tonight. If you haven't seen them, they're new to you.

If I've managed to catch up on all my TiVo'ed program, I'll be watching David Mamet and Shawn Ryan's espionage drama The Unit at 9, followed by the always stressful Amazing Race at 10 pm. On tonight's episode of The Amazing Race, entitled "It's Not Over Till the Phil Sings" (you've got to love those wacky titles), several teams are stranded at a foreign airport (Germany perhaps?) when airline computer systems crash. Meanwhile, one team leads another in the wrong direction. (When will the teams ever learn? It's this simple: don't follow other teams!)

And if you're not watching Scrubs, why not? I unfortunately have been watching the first two seasons on DVD and Buena Vista isn't releasing them quickly enough for me to catch up with the show's run. But, if you're looking for something to watch tonight, let me urge you to watch Zach Braff and Sarah Chalke and the gang in one of the smartest and funniest comedies on television. You'll thank me in the morning.