The Joy of "Earl" 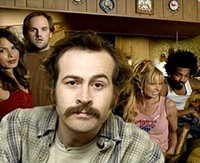 As my co-workers and friends know, there are very few things that usually bring me more joy (and yes, er, Joy too) than the one-hour single camera comedy block on NBC on Thursday nights at 9 pm. I look forward to Thursday nights with a newfound appreciation whereas before it was yet another day before Friday. But since NBC wisely shifted My Name is Earl and companion The Office to Thursday nights, it's the television highlight of my week.

Earl could have been truly a one-note joke. Meet Earl Hickey (Jason Lee): a career criminal, no-good thief, and lifelong loser. Whenever Earl does bad things, bad things happen to him. Like in the show's pilot, when he winds $100,000 on the lottery, only to get run over in a car the next moment. Recuperating in the hospital, he learns that his wife Joy (Jaime Pressly, in a career-defining role) has been having an affair with Darnell (a.k.a "Crab Man," played by Eddie Steeples, whom you might remember from those Office Max commercials) and that she is leaving him. (That Earl didn't seem to pick up on a clue to Joy's extramarital activities--namely that Earl, Jr., his youngest son, is black, is an ongoing joke.)

While Earl lays in traction, he catches the Carlson Daly Show, where Carlson talks about karma, a term which Earl is unfamiliar with. The notion of karma (simplified by Earl into meaning do bad things and bad things happen to you; do good things and good things happen to you.) soon takes on great meaning in his life. He soon begins making a list of all the bad things he has done in his very bad life and, with his dopey brother Randy (Ethan Suplee) in tow, sets out to right those wrongs.

Armed with the $100,000 lottery money, Earl and Randy move into a crummy motel, which they use as a base of operations/headquarters (though their room only has one bed in the room, which the brothers share) and which allows them to interact with sexy Latina motel maid Catalina (Nadine Velazquez), on whom Randy is nursing a serious crush. And each week, Earl attempts to cross off one more item off his list, usually with unexpected consequences.

The highlight of the season so far, besides for Joy and Darnell's wedding, was the simply genius episode entitled, "Stole P's HD Cart," which has Earl attempting to return the hot dog cart he had stolen from Pop, a beloved city icon. When Earl's former partner-in-crime Ralph (Giovani Ribisi) burns down the cart, Earl and the gang embark on one final heist to replace the cart. Using the music from "Kill Bill" alone would have made this a memorable episode, but seeing the gang pull off a jewel store "con" and their attempted office infiltration made this a repeat-viewing must. (A definite runner up to the crown is "The Professor," which guest stars Christine Taylor as a college professor who falls for Earl. But when Earl neglects to repair a bus stop he demolished, they must end their blossoming romance when karma goes on a rampage, disfiguring them both. With bees.)

But my favorite thing about show so far (besides the whip-smart writing, zany plotting, and gonzo casting) has been Jaime Pressly as Earl's conniving ex-wife Joy. A viper with frosted blonde hair and cut-offs, Joy is a rapture to watch, tossing off Southern-fried bon mots with relish. Trashy and tough, ruthless and rough, Joy is impossible to take your eyes off of. You really never know what is going to spew forth from her mouth... or who she's willing to run over for some quick cash. She's the trailer park equivalent of, say, Joan Collins on Dynasty, just with better legs and cheaper clothes.

So then, what went wrong last night?

Both Earl and The Office failed to entertain or even amuse as much as they usually do. Most everyone I know felt the same way... there was something just "off" about both. I felt this more keenly with Earl last night. Last night's episode focused on Earl attempting to atone for not paying his taxes, culminating in Earl being mistakenly arrested and thrown into solitary confinement and then trespassing on a local water tower with Randy. When both fall through the (empty) water tower's roof, the two brothers are trapped there for a number of days until the local government bands together and saves them. While the idea was a good one (though a little overly cerebral for Earl), the execution was a little lacking and seemed too filled with disparate plots (the Earl-falsely-incarcerated storyline could have been its own episode, especially with the return of Carnivale's Tim DeKay as a convict and Earl's old friend. While the episode picked up a little bit of steam in the second half (when Earl and Randy found themselves trapped in the water tower), it was Earl Lite, not the full-bodied, laugh-out-loud Earl that has been a much-needed staple of my comedy diet all season.

Any thoughts on what exactly went wrong last night?

Um, none of the above.

Instead, I’ll catch a new episode (for us Yanks anyway) of Black Books on BBC America. If you're not watching Black Books, why not? It's such a surreally funny show and Dylan Moran and Bill Bailey are simply brilliant.