From Across the Pond: "Little Britain" 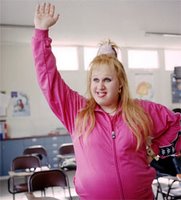 There are very few guarantees in this life. Death and taxes, certainly. Mortgages, very likely. But the one thing that you can depend upon in this life is British Comedy. Whenever things are gloomy or grey, the only thing that can cheer me up is the sight of some loony Brits putting on drag and creating some hilarious television comedy characters in the tradition of the Monty Python boys and Benny Hill. (What exactly is it about British comedians and their tendencies towards putting on women's clothing?)

Little Britain is no exception to this rule. Adapted from their hit radio series, David Walliams and Matt Lucas have created an alternate universe which on the surface seems similar to our own, but just beneath that is a world of psychotics, eccentrics, and psychotic eccentrics. Oh, and unreliable narrators who sound suspiciously like Dr. Who's Tom Baker.

My fear at first was that the show would be too similar to that other British cult sketch comedy series, The League of Extraordinary Gentlemen, but other than the occasional small village setting, the similarities end there. Walliams and Lucas are comic geniuses, able to modulate and change their voices to create an infinite array of characters, aided admirably by amazing costumes and even more brilliant hair and makeup.

Little Britain's denizens are a remarkably bizarre bunch. The real character breakouts are Lou and Andy. Andy is a balding, bespectacled, wheelchair-bound man, who seems to have some sort of mental disability... but in actually is just lazy and capricious ("I want that one!"). Lou is his long-suffering caregiver who seems oblivious to Andy's deceit. I haven't done them justice and seeing them together is a sight to be seen.

Then there's motormouth Vicki Pollard (above), a teenage dropout and young offender who trades her baby for a Boyzone CD; Marjorie Dawes, the vindictive leader of a Fat Fighters group; unconvincing transvestite Emily Howard; flamboyant Daffyd, "the only gay" in a small Welsh village; Prime Minister's aide Sebastian, who nurses a deep longing for the Prime Minister, played by Buffy's Anthony Stewart Head. The less said about creepy women's spa resident and seductress Bubbles de Vere ("Call me Bubbles, dahling, they all do.") the better; her disrobing at the start of Season Two provided the most disgusting sight gag ever employed on the show. (The only near-miss of the bunch is Des Kaye, a former children's television show host who now works in a DYI warehouse center. I just find him more pathetic than amusing.)

Like I said, it's a weird and wild ride through the heart of Little Britain. You wouldn't want to run into any of these characters on a dark and deserted street (or really for that matter on a bright-lit and well-traveled one either), but there's something hysterical and comically rewardng in peeking into their lives for a half an hour. While The Simpsons' Springfield may be a little more colorfully self-aware, and Arrested Development's Newport Beach a touch more zany, if you're seeking off-kilter comedy with a dangerous edge, there's no place better to visit than Little Britain.

"Little Britain" airs in repeats on BBC America and the first season is available on DVD.

As if there were any doubt of that. As Veronica is a repeat (again!) tonight, the only thing I'll be watching is my favorite creepy-island-adventure-mystery-drama show. Will Claire remember what happened to her and what Tom Cruise's cousin did to her during her two weeks of captivity? Will Locke and presumptive Other, Henry Gale, sit down for a tea party? Well, I'll be finding out tonight.