Summer Hours for "The Office" 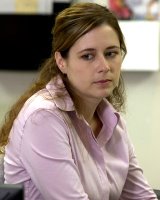 NBC announced today via press release that it has commissioned ten, original stand-alone "webisodes" of its comedy The Office which will premiere this summer on NBC.com (no iTunes?). The webisodes (heh, webisodes) will make up an ongoing arc and will feature the fictional Dunder Mifflin branch's accounting staff in an office whodunit. According to NBC's official release, "When the Dunder Mifflin accountants -- Angela (Angela Kinsey), Kevin (Brian Baumgartner) and Oscar (Oscar Nunez) -- discover that $3000 is missing from the Scranton office, no one is above suspicion, as the crack team of numbers crunchers tries to solve the mystery before turning on each other. "

Expected participants in the mini-eps of The Office include Rainn Wilson, Melora Hardin, Phyllis Smith, Kate Flannigan, Leslie David Baker and David Denman. While I was hoping to see first string players Steve Carell and Co. featured, I understand that they are off making big-budget features and the like and are too busy to entertain us during the long summer months.

Anonymous said…
Yeah, I'm glad it's not the A-list cast members or full episodes. That might be overkill. Better to leave us wanting more.
3/16/2006