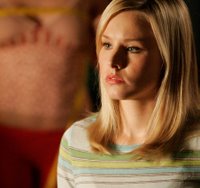 Zap2it is reporting today that UPN is moving mystery series Veronica Mars (and one of my personal fave programs) out of its Wednesday night berth and back to its original home Tuesday evenings at 9 pm, essentially moving the show out of direct competition with American Idol (and Lost as well).

Beginning as early as next week, Veronica Mars will now be sleuthing on Tuesdays while UPN will air repeats in the show's former Wednesday night timeslot for the next two weeks anyway. What will happen after that is anyone's guess. Unfortunately, relocating the show to a new night also removing the show's strong series lead-in in the form of America's Next Top Model, which had given the series a bit of an uptick in the ratings department.

The move comes at a dangerous time for the show as UPN and the WB decide their combined fall schedule for the new CW network. While Veronica's name had been thrown about as a strong possibility for making the jump come autumn, this move now throws some noirish shadows on the show's prospects. (If somehow One Tree Hill manages to get picked up and Veronica Mars doesn't, I cannot describe quite how livid I will be.)

But, until the new CW network unveils its fall schedule at the upfronts in May, let's hope that the only deaths are those in the show's fictional town of Neptune, California, and not Veronica Mars itself.

Anonymous said…
I am not happy about the move to Tuesday. Not at all.

"If somehow One Tree Hill manages to get picked up and Veronica Mars doesn't, I cannot describe quite how livid I will be."