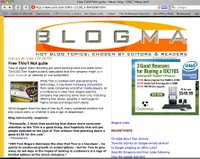 Time for a brief aside on this cold, snowy Sunday morning in Aspen. Imagine my surprise when I discovered that Televisionary had been not only mentioned, but quoted no less, about TiVo on technology site CNet's Blogma, a sub-site devoted to "hot blog topics, chosen by editors and readers."

Referring to a story about the announcement that TiVo could soon be giving away their set-top boxes in exchange for higher monthly service fees, Blogma chose Televisionary to represent the blog community and gave us the first release of TiVo Series 3 later this year (hopefully), which utilizes cable card technology, they will effectively clear up space on our cluttered entertainment consoles by doing away with the ubiquitous digital cable set-top box altogether... and allow users with two cable cards to record digital and/or HD programs simultaneously (and has a nifty little digital display on the front to show which program(s) you're recording).

Now if only Blogma's article didn't contain a broken link back to Televisionary...

Yes, I know what you're thinking: how can I still be watching this show. It's really more out of habit than anything else. I've been watching for so long--even yes the recent sub-par seasons--but this season has been marginally better. Comparatively, anyway. At least I have my DVDs of the show's glory years.

Um, kidding! Everyone knows my views about how unwatchable I find Desperate Housewives to be these days.

While I won't be watching The Sopranos (I stopped watching that series years ago), I am excited to watch the pilot of HBO's latest drama offering, Big Love. After the classical glories of Rome and the metaphysical angst of Carnivale, I can't wait to see HBO's take on Mormons. Oops, I mean polygamists-who-live-in-Utah-but-aren't-Mormons. You know what I mean.

John Roberts said…
We're fixing the link. Sorry about that.