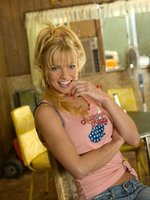 It's been said that great comedy comes from tragedy... or if not tragedy, then genuine emotion. I just had to write a few words about last night's super-duo of comedy goodness, My Name is Earl and The Office. As readers will remember, my thoughts on the respective series' previous episodes were overwhelmingly negative, but last night's episodes--both jam-packed with heart--restored my love for both shows.

On last night's episode of My Name is Earl ("Dad's Car"), Earl tries to repair his factured relationship with his estranged father (Beau Bridges) by returning the old Mustang that he had claimed to have driven into a lake at age eleven (he actually lost it in a drag race), but learns that the car was intended for him on his sixteenth birthday. Meanwhile, Joy sends Darnell and the kids away for a week so she can get drunk (it's her Mother's Day present to herself) but discovers that she misses them and the feelings she gets from being a mom. Retrieving the old Mustang from guest star Timothy Olyphant, Earl (whom we learn was supposed to be named Carl, except his dad accidentally added an extra loop on the "C" on his birth certificate) and his dad rebuild it together and actually enjoy spending time together. And, as Earl realizes that he cheated himself out of a relationship with his dad, he gets to cross himself off his list.

Meanwhile, on The Office ("Take Your Daughter to Work Day"), everyone reacts differently to the presence of Dunder Mifflin employee's children in the office, in a fantastic episode written by Mindy Kaling (she plays Kelly to boot). While Kelly dreams of getting married and having lots of kids very soon (to Ryan of course) and Angela avoids all contact with the kids, Pam's goal is to make just one kid like her by the end of the day (she succeeds, naturally). Meanwhile, Michael bonds with Toby's adorable five-year-old daughter (she actually likes him!) and inadvertantly reveals part of a traumatic childhood that made him who he is today. Was anyone not on the verge of sympathetic tears when they saw a little suit-wearing ten-year-old Michael talking about how he wanted lots of kids so he wouldn't have to force anyone to be friends with him? It nearly broke my heart... and almost made me like Michael. And then the heart-wrenching moment when Pam turns to make a comment to Jim, only to realize that he's already gone (figuratively and metaphorically), reminded me of how quickly this show can spin on a dime: seguing from quirky and absurd one moment to poignant the next.

And in the end, that's where great comedy comes from: the universal moments that we all feel in our daily lives, whether humorous or heartbreaking. Both Earl and The Office succeeded last night in connecting with me on both an intellectual as well as emotional level, making me laugh and cry (though fortunately not at the same time), and ultimately reminding me why I love television in the first place.

Anonymous said…
Yes! This week's "Earl" and "The Office" were season highlights. They were both hilarious and full of heart. Thursday night TV is back, Baby!
3/17/2006