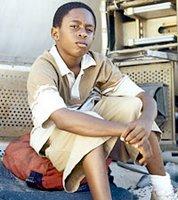 You can call off the search party, Michael. Missing Lost castaway Walt (Malcolm David Kelley) has been found... in Camden County. Well, not quite. But phenom Malcolm David Kelley did show up last night on a new episode of Thursday night favorite My Name is Earl, in an inspired bit of guest casting. (Whoever does the casting for Earl deserves a medal... or at the very least a commendation from the viewing public; the guest shots never seem gratuitous--cough, cough, Will & Grace, cough, cough--or forced.)

In last night's episode ("Boogeyman"), Kelley played Alvie, a rich kid terrified of the dark. Back in his thieving days, Earl traumatized him by hiding under his bed while trying to rob his house, an act Alvie has never recovered from. And this being Earl, there's a twist: Earl first makes it up to Alvie by being his personal slave for a day but ends up liking the kid and talks with him each night. Slowly, Alvie begins to be afraid less and less as they keep dimming the lights, until finally he falls asleep in the dark. End of story, right? Nope. Alvie, thinking that his father doesn't care for him now that he remarried and has two more sons, runs away from home and wants to live with Earl. And when Earl tries calling Alvie's dad to explain, there's a bit of confusion and everyone thinks Earl has kidnapped Alvie, which leads to a tense standoff with the police... and ultimately a tearful reunion for father and son.

It was wonderful to see Kelley, usually so tough and fearless as Walt on Lost, seem vulnerable and scared. This child actor is so natural, his talent so effortless, that he is a joy to watch in any role. Someone needs to give this kid his own show, stat.

Or at the very least, have Malcolm David Kelley (and Walt) make his way back to a certain haunted island in the middle of nowhere.