It's hard to keep a good avatar down.

Rumors are swirling that HBO may resurrect supernatural period piece Carnivale as either a two-hour movie or a four-hour miniseries that would reportedly tie up any dangling plot points (and, believe me, there were many). As a fan of the dust bowl drama (though even I will admit it was frustratingly obtuse at times), I would welcome any possibility for creator Daniel Knauf to wrap up his vision in a way that would satisfy the show's loyal audience, though I also have heard rumors of a possible comic book adaptation of the show as well.

While details are sparse (and HBO hasn't said anything official yet), rumors indicate that the Carnivale movie or mini-series would air sometime in 2007. And (and that's a rather big and) if the longform version does well ratings-wise, HBO could be open to bringing Carnivale back as an ongoing series in 2008.

News like that would force even scary Brother Justin to smile.

Hale is Hearty, if Not "Arrested" 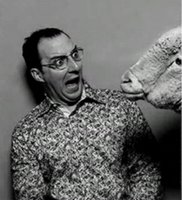 Okay, that was a mouthful. Tormented Bluth offspring Buster--a.k.a. actor Tony Hale--has been cast in a new pilot and would report to duty on the show if it gets ordered to series. That is, should the beleagured comedy Arrested Development not return in the fall (hello, Showtime, are you there?).

Numerous sources are reporting that Hale has signed to co-star with Andy Richter in the NBC pilot Andy Barker, P.I., in which Richter will play an accountant who takes over the offices of a private investigator. When clients come in looking for investigation work rather than accountancy, Richter concludes that working as a P.I. will prove to be more lucrative... and his math skills may even come in handy. Richter is himself a victim of brilliant-yet-cancelled status with the hilarious (and mourned) comedy Andy Richter Controls the Universe.

Should Arrested Development be brought back from the brink of demise--again, Showtime, show us AD fans some love--Hale would reprise his role as Byron "Buster" Bluth, and his role on Andy Barker, P.I. would then be recast.

Variety is reporting that Gilmore Girls' resident wit Lauren Graham has been cast as the female lead opposite Steve Carell in Evan Almighty, the sequel (of sorts) to Jim Carrey starrer Bruce Almighty. Graham will play Carell's wife in the picture, which also stars John Goodman and Morgan Freeman. In this film, Carell, reprising his role from the first film, plays a policitican who receives word from God (Freeman) instructing him to build an ark.

No word if that ark will include two Gilmore girls.

Tracking the Fallout: The CW #3

USA Today reports that Wall Street ad companies are less than enthused about the new CW's prospects. "They're creating something so similar to what they had, there's no sense of excitement in the ad community," says Starcom's Laura Caraccioli-Davis, who tells USA Today that the network blueprint "seems very old-school to me."

In other news, the usual game of musical chairs with the WB/UPN programming was played out again. Gilmore Girls, Smallville, Beauty and the Geek, America's Next Top Model and Everybody Hates Chris, along with WWE Smackdown, are again mentioned as near-certain locks for returning on the network. While Veronica Mars is now mentioned as being "on the fence" along with fellow WB sibling Supernatural. (Note to Dawn: you're bring back WWE Smackdown but not Veronica Mars, the best teen drama since Buffy?)

Even more disheartening, however, was the news that upcoming WB drama Pepper Dennis, starring Rebecca Romjin, was a contender for pickup on the CW next season. Having seen the completely unfunny pilot last year, I find that statement surprising.

Ostroff says that there will be one or two new shows on the schedule come fall. Will it be: Mercy Reef, the updated Aquaman franchise from the Smallville guys; Untitled Kevin Williamson Pilot (a.k.a. Palm Springs, a mystery soap from Dawson's Creek creator Kevin Williamson; Runaway, a drama about a family of fugitives; Split Decision, a teen drama about a girl who vacillates between the cheerleader and rebel crowds; She Said, He Said, an ensemble romantic comedy for which Nick Lachey is in talks to play the lead; The Game, a Girlfriends spinoff about football players' girls? Only time will tell...

In other CW news, Variety is reporting that the unfortunate moniker of CW will be sticking. In a study commissioned by CBS and Warner Bros., 48% of adults 18-34 polled were "already aware" of the CW. Leslie Moonves had previously said the CW had given themselves until the May advertiser upfronts to come up with a new name, in case they had second thoughts on the "CW." (Really? Could that be possible?) However, any possibility of changing the name became moot after seeing the results of the CW awareness study. "The likeability factor of the CW is high as well," Moonves told Variety.

Likeability? Based on two letters? Maybe they thought it was the Carsey-Werner network.

According to a press release, NBC has given an early pickup order to its drama pilot Kidnapped, ordering 13 episodes for the 2006-2007 season. According to the release, "Kidnapped is a high-stakes serialized thriller in which the teenage son of a wealthy Upper East Side family (Timothy Hutton, "Kinsey," and Emmy winner Dana Delany, "China Beach") is kidnapped and everyone is a suspect. The series focuses on the elaborate, triangulated game between the kidnappers, law enforcement, FBI, and the private negotiating team of the "perhaps" not-so-picture-perfect family. "

And in the age of the post-procedural serialized drama (see Lost, Desperate Housewives, Invasion, etc.), it's only fair that NBC is now getting into the game. (Yes, I know they had Surface, but please, people, let's be serious here.)

9 pm: My Name is Earl and The Office.

Like chocolate and peanut butter, the very best comedy combination. Let's just hope that they are a step above in terms of quality than their previous installments, which left me less than wowed.

On tonight's episode of My Name is Earl ("Dad's Car"), Earl tries to surprise his mother with a way overdue Mother's Day gift, but instead she asks him to do something nice for his dad (guest star Beau Bridges). Meanwhile, on tonight's episode of The Office ("Take Your Daughter to Work Day"), everyone's least favorite boss, Michael Scott, manages to strike up a friendship with the 5-year-old daughter of his enemy.

Also, did we REALLY need a Bruce Almighty sequel? (Ok, admittedly, this is from someone who almost walked out of the first one).
3/16/2006