"Bees Are Much Calmer Than All This": An Advance Look at the Season Premiere of "The Amazing Race" 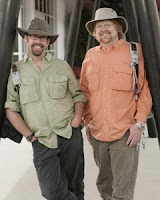 It seems like a lifetime since we last had an installment of reality series The Amazing Race and, after an interminable wait, the series finally returns this Sunday night at 8 pm. I had the opportunity to watch the season premiere a few days ago (that thing was burning a hole on my coffee table until I sat down to watch it) and was immediately sucked back into the addictive world of road blocks, detours, and Phil Keoghan.

While it's a little too early to tell which teams are stronger than others and which ones are worth rooting for, I already do have two favorite teams... and one team I already cannot stand. Making the top of my list are the aforementioned goateed geeks Mark and Bill, who are instantly likable as they race around with their minds overflowing with Watchmen trivia; the duo--friends for over 23 years--are attempting to be the first team to ever run the race strategically (but didn't Rob and Amber attempt to do just that?) and are proud members of the geek tribe.

I'm also pretty taken with brother-and-sister team Nick and Starr, whom I initially assumed would make me cringe with what I believed to be a co-dependent relationship that bordered on creepy... but they've completely won me over with their can-do spirit, cooperativeness, and teamwork. (And, no, they're not twins.) By the end of the premiere, I was rooting for them to come out on top.

But the real question is: which team do I already hate with a fiery passion?

The answer to that is easy: it's dating couple Terence and Sarah, whose combative nature with each other, unlikely relationship (find me a couple more dissimilar and I will gladly pay you), and social awkwardness immediately rubbed me the wrong way. While Terence gladly shuns the other contestants (he's aware from the start that this isn't a popularity contest but a race and then creepily says that Sarah is supposed to be holding him instead of talking to the others), Sarah has this burning need to become friends with everyone on the Race right off the bat and gets pissed when an offhand comment about the difficulty of finding a cab goes unnoticed by Nick and Starr... and promptly turns Sarah into a raving maniac who freaks out that they've--to quote the immortal words of Black Books--"blanked" her. (In actuality, they're all in a race and I don't think Starr or Ryan even noticed her mumbling at them.)

The rest of the competitors are a pretty motley bunch, especially elderly Oregon beekeeper/dyed-in-the-wool hippies Arthur and Anita and overweight frat boys Andrew and Dan... but none of the other teams have really yet to make an impact on me as a viewer. I'm hoping next week's installment pushes the teams a little more and gets us to see more of the inter- and intra-team dynamics (look for Sarah to flip out at Nick and Starr at the airport over a lack of a hello!) but I'm just as hooked as ever on this compelling and dynamic series.

The Amazing Race premieres Sunday at 8 pm ET/PT on CBS.

Anonymous said…
I also had the opportunity to screen the first ep and, though I don't have any favorites quite yet, I totally agree about Terence and Sarah being the most irritating team of the bunch. They seem to be living on a different planet and, apparently, don't know how to interact with other human beings (or each other, for that matter)!
9/26/2008

Anonymous said…
I can't wait for this to start up. And from what you say I think I will be rooting for Bill and Mark too!
9/26/2008

Jennifer said…
I guess it's a given that there'll be an annoying dating couple on every season of the Amazing Race...
9/26/2008

Anonymous said…
Are you the authority on social skills because you write a blog about a reality show? I love the show and haven't seen the premiere yet, but I'll hold my opinions about a team until after the first few episodes. How much can they really have of this dating couple in the first episode and you're ready to throw them under the bus? I just think it's early for someone who writes on a computer about a reality show that is proven to not really be reality to be providing commentary on social skills. There seems to be some irony to me...
9/27/2008

Anonymous said…
Wow, it's amazing to me to see someone comment about someone's criticism of a couple on a reality series that you haven't even seen yet. Seriously, dude calm down. I am going to assume you know these people or you wouldn't be freaking out like that.

I'm really looking forward to this especially after reading this review. TAR is always a highlight of the season and it seems like there are some interesting characters to follow and from the above some polarizing ones as well. People love villains, I guess!
9/27/2008