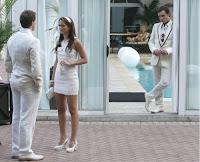 So Gossip Girl viewers. You've read my review of the first three episodes of the second season of Gossip Girl and by now you've all hopefully watched the first Hamptons-laden installment ("Summer, Kind of Wonderful").

Which leads me to be very, very curious: What did you all think of Catherine (Madchen Amick), Nate's secretive lady lover? Did you swoon over Blair's latest boy (Patrick Heusinger), easily the most transparent plot to make one Chuck Bass very jealous? Did you applaud Laurel's near-comeuppance in the form of one Jenny Humphrey? What did you make of the fact that former Lonely Boy himself, Dan, suddenly found himself the most eligible bachelor in all of Manhattan? (Or Brooklyn, anyway.)

And the million-dollar question: are you just as hooked on Gossip Girl now that it's returning for a second season of debauchery, designer frocks, and deceit?

I wish I could have seen this in advance of the actual launch but, as we all know, the CW opted not to send out advance screeners of the 90210 two-hour premiere to press. So we'll have to wait until tomorrow to talk about the return of one of the biggest franchises of the 1990s to the airwaves. On tonight's premiere ("We're Not in Kansas Anymore"/"The Jet Set"), Harry Wilson and his family move from Kansas to Beverly Hills, where he becomes the new principal, his kids try to fit in, and some familiar faces from the past return.

If my gushing review of this bittersweet (yes, it's literally bitter AND sweet) comedy wasn't enough, why not tune in yourself to see just how wonderful the brainchild of writer/co-stars Ruth Jones and James Corden really is? On tonight's episode, Gavin drives out to Barry following a misunderstanding on the phone so that he and Stacey can try to fix things in person.

I can't look away, no matter how hard I try... On tonight's episode, Josh reconsiders his career, Chad tries to close a deal with a basketball star, and I continue to laugh at both of their inane hairstyles.

The CineManiac said…
I for one LOVE this show. As I said in my review of the show, I don't think The CW needs the new 90210 (although it won't keep me from watching it) because I feel like they already have the BH90210 of this generation in Gossip Girl.
The new season is great and I can't wait to see what's next.
9/01/2008

Danielle C.F. Maris said…
I agree with "Cinemaniac" that the CW found its new 90210 in Gossip Girl. It has all the soapy TV teen trouble that you could ever hope for. And starting this season in The Hamptons was fabulous!
9/02/2008