Channel Surfing: Possible End for "Flight of the Conchords" and "Gavin & Stacey," Danson "Bored to Death" for HBO, "Gossip Girl," and More 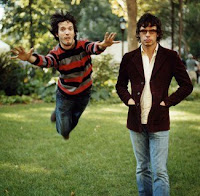 Good morning and welcome to your Wednesday morning television briefing. I ended up watching 90210's two-hour debut last night, so look for a review of the premiere in just a little while.

Could the upcoming second season of comedy Flight of the Conchords--set to air in 2009 on HBO--be the series' last? That's the indication of a report in The New Zealand Herald, in which creator/stars Bret McKenzie and Jemaine Clement are quoted as saying that, due to creative difficulties with creating songs for the sophomore season, Flight of the Conchords could be over sooner rather than later. "The second series seems to me like it would be a good end to the show," said McKenzie. (TV Guide)

Jennifer Aniston will guest-star on 30 Rock this season as Liz Lemon's former roommate/stalker. But you lucky Televisionary readers knew that yesterday. (Televisionary)

Ted Danson (Damages) has been cast as a lead in HBO's comedy pilot Bored to Death, opposite Jason Schwartzman who plays Jonathan, an alcoholic struggling writer who reinvents himself in the mold of his heroes from the novels of Dashiell Hammnett and Raymond Chandler as a private investigator. Danson will play Jonathan's friend, an arrogant magazine editor. Lest you Damages fans think that Danson's Arthur Frobisher won't be turning up this season, think again: Danson will appear in at least three episodes of Damages. (Hollywood Reporter)

Willa Holland (The O.C.) will join the cast of the CW's Gossip Girl for three episodes this season; she'l play Agnes, a model who works for Eleanor Waldorf who "befriends Jenny Humphrey (Taylor Momsen) but also tries to tempt her over to the dark side (think threesomes and stripteases)." (Entertainment Weekly's Hollywood Insider)

NBC has handed a director-contingent pilot order to one-hour drama Lost in the '80s, from writer/executive producer Bob Brush (The Wonder Years). Project, from Sony Pictures TV and Mitch Hurwitz, Eric Tannenbaum, and Kim Tannenbaum's Tantamount, has been described as Fast Times at Ridgemont High meets The Ice Storm... and will be set in the 1980s, natch. (Hollywood Reporter)

Tim Roth (Incredible Hulk), Kelly MacDonald (State of Play), Bill Milner (Son of Rambow), and John Simm (Life on Mars) have been cast in Annabel Jankel's two-hour adaptation of David Almond's children's novel Skellig for Sky One. Pic, about a boy who discovers an owl-like creature (Roth) living in the garage of his new home, will air next year and began production yesterday in Cardiff. (Variety)

In other UK news, Sarah Lancashire (Clocking Off), Neil Pearson (The State Within), Sarah Alexander (Coupling), and Richard Fleeshman (Coronation Street) have been cast in musical drama The Choir Project, set to air in 2009 on BBC One. Project, written by Debbie Horsfield (Cutting It) revolves around the local choir of a small town in the north of England. (BBC)

Meanwhile, Ruth Jones and James Corden, who created and co-star in BBC Three's comedy Gavin & Stacey (currently airing Stateside on BBC America) have said that they are "too busy" to write a third season of the hit comedy but haven't ruled out the possibility that their schedules will open up long enough to sit down together. A Christmas special for Gavin & Stacey is set to be filmed in October. (Digital Spy)

Cycle Eleven of the reality competition begins tonight. (You can read my advance review of the two-hour launch here.) On tonight's episode ("The Notorious Fierce Fourteen"/"Top Model Inauguration"), 30 wannabe models are trimmed to 14 contestants, with one revealing that she is transgender, as they move into their new digs and participate in a photo shoot at the ballot box embodying issues that are important in the next presidential election.

Season Five (the final season on Bravo) of Project Runway continues tonight. On tonight's episode ("Double 0 Fashion"), the designers are given a challenge to create looks that are inspired by one of the fashion icons of the last decade... looks that are then to be judged by fashion visionary Diane von Furstenberg. And, yes, the contestants are shaking in their designer boots.

It's the series premiere of motorcycle drama Sons of Anarchy. In the pilot episode ("Pilot"), members of the Sons of Anarchy Motorcycle Club Redwood Original (Samcro) try to keep their town safe from drug dealers and developers... while running guns and putting the competition out of business.

karigee said…
I hate to think of a world without "Conchords," but it's probably the right move -- seems like a concept with a short lifespan baked into it.

Anonymous said…
I love Flight of the Conchords but, if they're having creative difficulties, I'd rather see it end than have it be sub par. I'm sure Bret and Jemaine will move on to new and hilarious things!
9/03/2008

Danielle C.F. Maris said…
HBO's Bored to Death sounds like it could be good. I love the casting of Ted Danson and Jason Schwartzman and the concept sounds interesting. HBO needs some new material. I can't handle any more bad episodes of Entourage and, if Conchords ends, that leaves them with very little in the comedy realm.
9/03/2008