Transformations and Tantrums on "Project Runway" 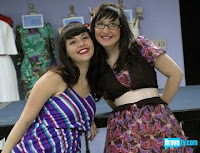 Am I the only one who is suffering from Project Runway ennui?

Last night's episode of Project Runway ("Transformation") did little to cure me of my lingering symptoms: a decided lack of interest in most of the contestants, withdrawal from the drama and energy of last season's contestants, and a feeling that we've seen this all done before.

I can't be the only one who is looking for the sort of sweeping vision and innovation of Christian among a pack of contestants who seem mostly destined to be forgotten as soon as the end credits roll on the Bryant Park finale. And it definitely has seemed like a forgone conclusion for quite some time now that the final three designers would be Jerell, Leanne, and Korto. In fact, the only shred of excitement I had for the series came from the scenes for next week's installment, in which it seems like spoilt Kenley finally gets her comeuppance at judging. That, in my opinion, is worth tuning in to see.

Last night's episode brought the designers a specific task: creating a sophisticated and professional look for a recent college graduate; in order to succeed, they'd have to work with their clients--the college grad and her mother--to create an outfit that embodied their character and style but also oozed sophistication.

The results? Pretty much to be expected. I knew that either Suede or Joe would be the one to be auf'd this week and I was happy that at least one of them would be going home as both have managed to hold on during this competition for much longer than I would have initially imagined.

Jerell turned out a gorgeous pencil skirt and blouse combo with an androgynous cardigan; the overall look was sleek and sophisticated and turned a girl clearly in need of some fashion invention (not to mention some color correction) into a confident and powerful woman. I was glad that he took home the top spot last night because, of all of the designers, he turned in something absolutely wearable AND aspirational. It looked expensive and luxe and transformed (aha!) his client into a slightly older version of herself.... in a good way. (Unlike, say, Joe's design.)

Kenley's 1950s-inspired dress (quelle surprise) was absolutely adorable and I thought it was at least interesting the way that she added on the men's vest and belt, which gave the entire ensemble a little bit of a designery edge. (She lucked out and got a mini-Kenley as a client.) However, the vintage look is one that we've come to expect from Kenley and she doesn't appear to be in any way willing or ready to break away from her familiar tropes... and yet she laughs at Suede for being unwilling to bend as a designer or challenge himself to do something different. (Pot, meet kettle!) At least next week it does appear that she's called out for her fashion failings on the runway though she would be wise to listen to mentor Tim Gunn (whose advice she throws out the window along with her manners each week), especially as he's now one of the judges at the finale. Hmmm...

Korto did a fantastic job as always. Her jacket was absolutely amazing, bringing a rough-hewed edge to the entire outfit and looking original and sophisticated at the same time. Underneath, an awesome green and white print dress... which we barely got a look at. I do wish that her model/client had removed the jacket on the runway so we could take a peak at what was hiding beneath.

I thought Leanne did a better job than the judges did. Her ensemble was really professional and quite cute and I didn't think it was matronly at all. Again, the jacket prevented the whole look from being seen but I thought that she did a fantastic job with the dress in both its incarnations. Oh well, you can't win them all.

Suede... Wow, Suede's design looked like it came straight from the pages of Seventeen, circa 1992. I thought that the dress was probably one of the most successful things he's done to date on the series but the coat was horrendous with its unintentional asymmetry and those awful bell sleeves. Shudder.

And then there was Joe. I have to agree and say that he did present an old person's version of what was considered sophisticated office attire and he completely missed the boat on this one, refusing to accept that his client would be interviewing for graphic designer positions rather than, um, a job on the stock exchange floor. It completely aged her and was inappropriate for her background and career prospects. Badly done on all fronts, especially as it seemed so poorly made to boot. Ouch.

So it was no surprise that Joe would be the one cut from the competition this week though I do wish that (A) Suede had joined him and (B) the judges would have called Kenley out for cackling during the judging, especially as this is the second time she has done so. I understand that I want to laugh at a lot of these designs but show some respect for your fellow competitors, K.

At least there's next week to look forward to. Ha ha.

Danielle C.F. Maris said…
Kenley really is a spoiled brat. This wasn't the first time she had a laughing fit on the runway. It's incredibly immature, no matter how good of a designer she is (or thinks she is). And being rude to Tim? Now that's just unacceptable. I was so happy that she didn't come in first. The look on her face was priceless.
9/18/2008

Kelly said…
I don't understand what everyone liked about Kenley's outfit. It was not flattering to the client's figure, and did not look at all professional. It looked way too little girl-ish.

I didn't like Joe's outfit all that much (more in the unflattering fit/poor construction than overall style) but it seemed very hypocritical of the judges to horribly bash both Joe and Suede for doing something that looked from a past era while gushing about Kenley's "retro" looks over and over again. You can't have it both ways.

As for the winning outfit, was I the only one who thought the skirt was horribly short for a girl going on job interviews?
9/18/2008

Anonymous said…
As much as I liked Kenley's dress, I was hoping that after her laughing fit, she would have been auf'd on the spot. Now THAT would have shaken up this season!

I also agree re: Leanne's dress - I thought it was nice. And maybe they only needed a bottom 2 this week. And I do wish we could have seen Korto's dress more.

And I completely agree that the final 3 seems like a foregone conclusion, and has for a while (or at least until last week when Terri was auf'd. Heh).
9/18/2008